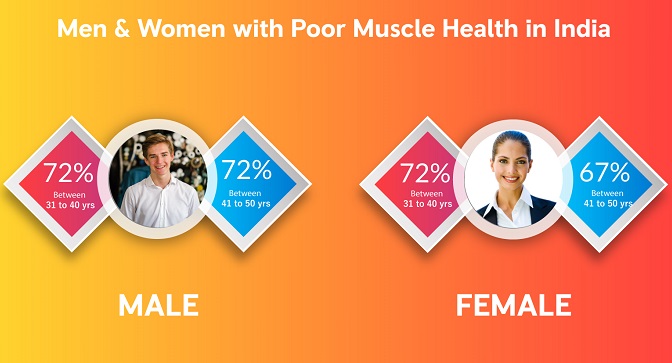 New Delhi: Muscle health is often ignored since it is misunderstood as an area which is of relevance only to a sportsperson or a gym goer. Not many Indians know about its overall impact on health and wellness. Good muscle health is not only a key for an active lifestyle, but also for carrying out our daily physical activities to maintain a healthy life!

According to a recent nationwide study by InBody, a global leader in body composition analysis in association with IPSOS, leading global market and opinion research firm, an alarmingly large proportion of Indians suffer from poor muscle health. The study was conducted across 8 cities – Delhi-NCR, Mumbai, Kolkata, Chennai, Ahmedabad, Lucknow, Patna and Hyderabad. Covering 1,243 people, the respondents were a mix of working and non-working individuals between the age of 30-55 years.

The regional data presents an even more alarming picture:

From the 8 surveyed cities, the data revealed that more than 70 percent of males and females in the age group of 30-50 need to gain more muscle mass.

The study also analysed the body protein level and the trend was similar to that of the poor muscle mass levels.

Nutrition and exercise have been shown to play a major role in improving muscle health. With reference to nutrition, one specific nutrient that plays a role in muscle health is Protein. The present research acknowledges the importance of protein in daily diet and exercise to maintain good muscle health.

According to the study, 7 out of 10 people at the pan India level having poor muscle health is a matter of great concern and it is important to find out ways and means to address this issue. There is an urgent need to spread awareness about Muscle Health, role of adequate protein intake and exercise for a healthy life.

Rahul Koul - May 14, 2020
164
In an exclusive interaction with the BioVoice, Dr Rishi Bhatnagar, President, Aeris Communications, and Chairperson of The Institution of Engineering and Technology - IoT panel talked about various aspects of dealing with pandemic including the role of technology and communication.....................