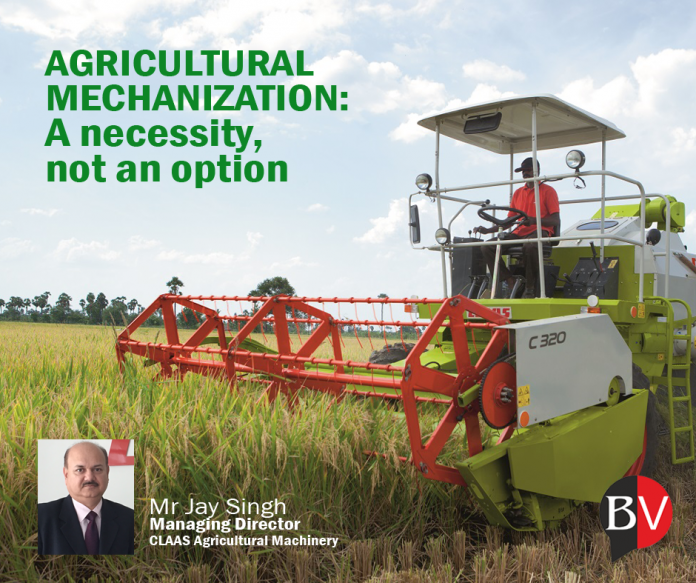 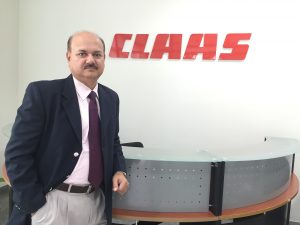 About Author: Mr Jay Singh is the Managing Director of CLAAS Agricultural Machinery that was founded in October 2014. The company manages all sales, marketing, distribution and after sales operations of CLAAS India, one of the world’s leading manufacturers of agricultural machinery in India and other SAARC countries. Jay has 27 years of experience in the field of infrastructure and agricultural equipment and has comprehensive knowledge of the commercial and economic aspects of doing business in Asia-Pacific.

As the country awakens to the plight of the Indian farmer, the swelling population leads to a growing concern to meet the demand for food grains, the disturbing farmer suicides and the reduction of population engaged in the most crucial sector of the Indian economy; the governing bodies have undertaken several reforms to ensure that the agriculture sector thrives.

An important yet neglected aspect of Indian agriculture is the mechanization of the sector. While other sectors grow through continual adoption of more modern technology and access to improved production methods, the mechanization levels in agriculture have remained stagnant technologically for almost 20 years. This is not because modern machines are not available, but because the Indian farmer does not have access to it. The Indian farmer is vulnerable with limited knowledge and the financial capability to adopt machines that enhance production. Mechanization, which has benefitted all other sectors, has failed to reach the Indian farmer with its full potential. Thus, today we stand at a juncture where it has become a necessity to modernize agriculture through intensive promotion of mechanization.

“Mechanization can play a pivotal role by effective time management, reduction in wastage, the cost of production per acre and improved operating efficiency through climate controlled ergonomic operator environment, thus leading to an increase in revenues.”

Mechanization can play a pivotal role by effective time management, reduction in wastage, the cost of production per acre and improved operating efficiency through climate controlled ergonomic operator environment, thus leading to an increase in revenues and much needed improvement in the living standards of the farmer community. In recent years, mechanization has also helped bring back rural youth to this vocation which was rampantly being abandoned by them. Agricultural mechanization has opened up avenues such as alternate professions which have resulted in increased profits and over the years have developed into lucrative business opportunities. One such avenue is the mushrooming of custom hiring centers, which has resulted in an entrepreneurial trend in the sector.

As the government looks at doubling the income of farmers, new and innovative ideas to achieve this goal are constantly being explored and the establishment of custom hiring centers is one such idea that has the potential to contribute to this in a significant manner. The custom hiring centers in India have played a dual role in improving the state of agriculture in the country. Firstly, it has proved to be a boon for the farmers with a progressive mindset who are increasingly exploring a variety of farm machinery. It is also enabling access of machines to smaller farmers who may not have this access otherwise owing to small land holding or limited finance.

Secondly, this acts as the thread which pulls back the rural youth to its roots and encourages them to adopt agriculture as their primary profession and at the same time, fulfill their dreams of becoming entrepreneurs. These centers across the country have also established the fact that Indian farmers are willing to adopt latest techniques in farming provided they have access to the same. It is because of this, that we are slowly moving beyond tractors and understanding the importance of other specialized machinery such as grain & forage harvesters, transplanters, balers etc., to reduce wastage and promote time efficiency at each stage of production be it, sowing, harvesting or utilizing the leftover straw after harvest by baling it and converting it to cattle fodder.

An overview of agriculture mechanization in SAARC

When we compare modernization in agriculture to that in other SAARC (South Asian Association for Regional Cooperation) counterparts, the challenges and progress appear to be similar. The SAARC region comprises of 23.7% of the world’s population and a majority of this population is dependent on agriculture. The average size of landholdings in SAARC countries is small, ranging from below 1.0 hectare in Sri Lanka and Nepal to below 0.5 hectares in Bangladesh. The average size of landholding in Pakistan is comparatively higher at 3.0 hectares. Apart from this, the growth rate in productivity is also low; per hectare yield in these SAARC countries is lower than the global average.

“While agriculture mechanization in some SAARC countries like Afghanistan are still highly dependent on tractors, countries like Bangladesh have increasingly promoted the use of threshers, transplanters and combine harvesters”

Considering that agriculture in most of these countries is the livelihood of majority of the population and is highly dependent on climatic conditions, there is a need for penetration of modernized techniques of farming and mechanization in this sector. This would not only help farmers reap more from the same plot of land but would also lead to overall economic development of these countries. Taking into consideration the small landholdings and the large percentage of population dependent on agriculture in these countries, there are similar problems that plague the agricultural sectors of all these economies because of which adoption of mechanized farming in SAARC countries still remains low as compared to global averages. The subsidies provided on farm machinery by the government still need reform.

While agriculture mechanization in some SAARC countries like Afghanistan are still highly dependent on tractors, countries like Bangladesh have increasingly promoted the use of threshers, transplanters and combine harvesters. Similar to the labour shortage in India, manual labour in Bangladesh is also scarce during peak times of sowing and harvesting. This has been one of the major reasons for adoption of agricultural mechanization in the country. In Bhutan, the Agriculture Machinery Center (AMC), has played an instrumental role when it comes to making farm machinery accessible to farmers. A number of innovations and research in the farm mechanization sector is also be attributed to this center. Bhutanese farmers are an inspiration when it comes to adoption of farm machinery. Farmers who do not even have proper access to basic infrastructure such as roads to transport these machines have carried and reassembled them at their remote farms to reap the benefits of farm mechanization. The Department of Agriculture and FMRC (Farm Machinery Research Center) in Sri Lanka are fast tracking testing, certification and adoption of modern farm machinery to fuel mechanization in the country.

To conclude, it is true that the South Asian countries are now opening their eyes to the significance of adopting mechanization in this crucial sector. Though it is heartening to see that state governments are taking up initiatives to improve livelihoods of farmers, such as conducting training sessions for women farmers to use machinery or introducing mobile applications to generate awareness; when it comes to reforms, there is scope for a lot more, and especially in India, where we have established goals of doubling farmers’ incomes, there is a need to emphasize that mechanization is one of the significant contributors to achieving our targets.