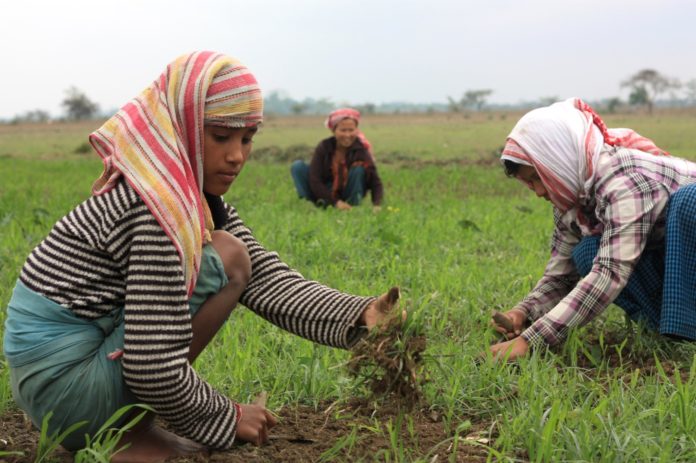 Bangalore: In the last two years, the government says that it has chalked out a plan to reduce the input cost in the agriculture sector and to provide farmers better return for their produce. Let us take a look at the various initiatives launched by the government.

The union agriculture ministry is taking a number of initiatives to minimize the cost of agricultural production. With this goal in mind, 14 crore farmers in the country are being given Soil Health Cards. Apart from this, Paramparagat Krishi Vikas Yojana has been launched to promote organic farming. Neem Coated Urea, improved varieties of seeds and planting material, schemes like Pradhan Mantri Krishi Sinchayee Yojana have been introduced.

As per the agriculture and farmers welfare minister, Mr Radha Mohan Singh, “Prime Minister, Mr Narender Modi has taken the resolve to double the income of farmers. The government is also giving priority to the enterprises linked to agricultural sector so as to achieve this target.”

Farmers are also being provided agricultural loans on concessional rate. The norms related to disaster relief have been altered to help the farmers affected by natural calamities so that they are compensated for the losses appropriately. The discrepancies existing in crop insurance schemes have been removed and a new scheme called Pradhan Mantri Fasal Beema Yojana has been launched.

The Government has taken a historical initiative to provide farmers better return of their produce. The concept of one nation and one mandi – has been taken ahead. The long pending mandi/ marketing reforms process has been accelerated. The pilot project related to e-mandi has been launched in this financial year. Under this, 21 mandis of 8 states have been linked so far. The government is continuously making efforts to bring uniformity in the rules and regulations pertaining to various mandis in various states. Most of the states have expressed willingness to participate in this project. As of now, proposals of 365 mandis in 12 states have been sanctioned. Ministry of Agriculture has set a target of establishing unified e-trading platform in 585 mandis throughout the country by 2018.

The government in its report card says that it is also imparting priority to the ancillary areas of agricultural sector. Under this, horticulture, livestock, dairy, beekeeping as well as poultry have been promoted. A new scheme called National AgroForestry has been initiated for planting trees over the meadows. The dairy and fisheries sectors have made greater strides in terms of growth and development. The government has accelerated second green revolution in the North Eastern region to achieve food security in the country which will lead to enhancement in the agriculture productivity on the one hand and on the other will result in improvement of the farmers’ economy in North Eastern region. A number of schemes have been launched to promote the production of pulses and oilseeds so that dependence on imports can be reduced.

The government has expedited the efforts to ensure better storage of perishable agricultural products so that the farmers may get better return of their produce by adopting better market practices. During last two years, India has acquired largest cold storage capacity in the world which is 32 million tones. Nearly 250 projects comprising of more than one million capacities have been developed.

To remove the scarcity of manpower in agricultural sector, the government has opened two central agriculture universities, 14 agriculture colleges and various agriculture research institutes. Recruitment of scientists has been increased.  All agriculture science centers established in nearly all rural districts are being equipped with sophisticated and scientific facilities throughout the country.

While all the above measures appear to be massive and the government’s efforts must be appreciated but at the same time the implementation part would be the crucial one. If the benefit of these schemes doesn’t actually help in upliftment of the marginal farmers, these serve no purpose. The divide between rice and poor farmers, the landlords and the landless farmers will have to be bridged. The shrinking agricultural land and number of farmers will have to be addressed too. Hope the government will discuss this through joint planning with states and chart out a long term effective strategy. Let the farmers be identified with prosperity and happiness, not poverty and suicides.