Speaking on the occasion, Mr J P Nadda said that this is one of the most historic days for AIIMS as this is the largest ever health sector investment commitments made by Government in a public health project at one event. “The past two years have witnessed a historic growth in the form of infrastructure & other facilities,” Mr Nadda said. The Health Minister assured that the Government is committed to ensuring that the new AIIMS will meet the same standards of service as AIIMS, New Delhi. No effort will be spared to make them the very best, he added. Mr Nadda stated that AIIMS has created a benchmark in the field of healthcare not only at the national level but internationally also. It has a great testimony and we must try to replicate it in the new AIIMS, he added. He noted that the new Institutes will be “AIIMS” and not “AIIMS-like”.  “Innovation for cost effective and affordable healthcare is the need of the day. To take up all these challenge AIIMS needs strengthening and expansion of its facilities. Which we are committed to provide,” he added. 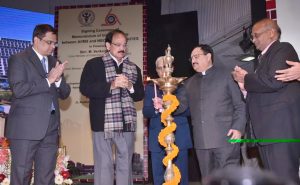 Speaking at the ceremony, Mr Venkaiah Naidu said that that in line with the vision of the Prime Minister, we should reform, perform and transform and this initiative reflects that. Mr Naidu further stated that this initiative is going to change the face of AIIMS. “The profession of doctors is a very noble task and AIIMS has contributed significantly in providing quality healthcare. The expansion plans of the Government would not only improve medical education but will also provide greater access to world class facilities to the citizens,” Mr Naidu added. He further said that we should have such premier institute in every state of the country and India is well on its way to becoming a medical hub in the world.

The agreement with NBCC for redevelopment envisages construction of 3060 residential apartments at Ayur Vigyan Nagar campus and 868 apartments at West Ansari Nagar Campus by construction of 3060. The total augmentation of 3928 units would take the total available residential units of AIIMS to 4505. The detailed proposal identifying the housing requirements/type design/project rollout schedule has been firmed up after wide consultations and deliberations by a broad based committee of faculty and consensus was arrived at in a meeting Chaired by the Director, AIIMS in presence of  Heads of Departments, Faculty Association, the Officers Union, the Nursing Union and the Karmachari Union .

The agreement with HLL Infra Tech Services Limited (HITES) is for procurement of all types of Medical Equipment and Services including Medical Gas distribution system, CSSD, Modular Operation Theatres for National Cancer Institute, AIIMS, Jhajjar, Haryana. Similarly, HSCC has been selected as a project management consultant for the design, tendering, supervision of engineering components and for equipment procurement and allied infrastructure works for the proposed National Cardiovascular Institute, (NCVI) at the AIIMS second campus at Jhajjar.

Also present at the function were Prof M C Misra, Director AIIMS, Prof Balram Airon, Dean (Academic) & Chief of the CTVS Centre, Prof Rath, Head, National Cancer Institute along with senior officers of the Ministry of Health and Family Welfare along with faculty and students of AIIMS.