New Delhi: Mercom Capital Group, a global communications and research firm, released its report on funding and mergers and acquisitions (M&A) activity for the Healthcare Information Technology/Digital Health sector for the first quarter of 2017. Mercom’s comprehensive report covers deals of all sizes from across the globe.

Venture capital (VC) funding, including private equity and corporate venture capital, in the Health IT sector almost doubled quarter-over-quarter (QoQ), coming in at $1.6 billion in 165 deals compared to $845 million in 159 deals in Q4 2016. VC funding in Q1 2017 was also up compared to Q1 2016 when nearly $1.4 billion was raised in 146 deals. The Digital Health sector has now received $20 billion in VC funding since 2010.

Total corporate funding in Health IT companies – including VC, debt and public market financing came to $1.8 billion compared to $1 billion in Q4 2016. 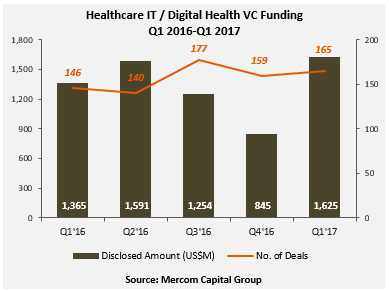 “Digital Health funding is off to a fast start this year and there was no visible ‘Trump effect’ on investments in the sector, at least in the first quarter, and publicly-traded Digital Health companies actually fared much better in Q1 than last year,” commented Raj Prabhu, CEO and Co-Founder of Mercom Capital Group.

There were 65 early round deals, including 14 Accelerator and Incubator deals.

Practice Management Solutions companies were involved in the most M&A transactions with six, followed by Apps and Data Analytics with five each, then Consulting and Telemedicine with four apiece.