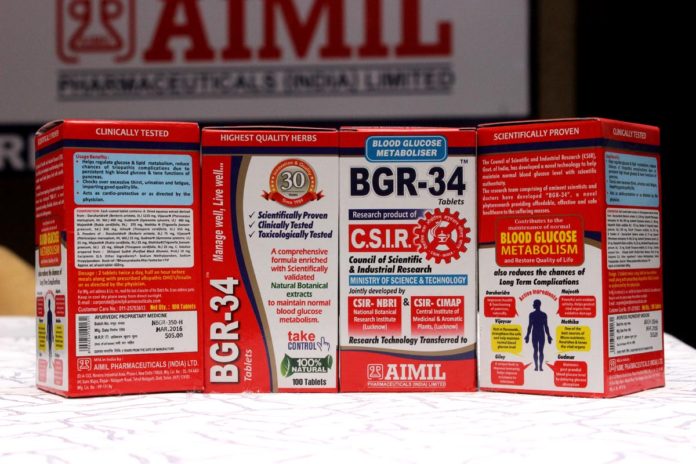 New Delhi: “Ayurvedic anti diabetic drug BGR-34 is scientifically tested and very effective in treating type 2 Diabetes,” said Mr Shripad Naik, Union Minister of State, Ministry of AYUSH in Rajya Sabha. While answering the question raised on the efficacy of BGR-34, Mr Naik shared that the medicine has been launched in the market after undergoing all the required scientific tests. He further added that the drug has been successful in improving the blood glucose levels of the diabetes patients and is available on all major chemist counters across the country.

BGR-34 has also got number one position in anti-diabetic ayurvedic product category in IMS Health ranking and made its position among the top six brands in the survey conducted for new launches in Indian pharmaceuticals market.

The anti-diabetic drug, BGR-34, has been in the market for about 9 months now, which is developed and validated for its efficacy and safety by the scientists of “National Botanical Research Institute(NBRI)” and “Central Institute of Medicinal and Aromatic Plants(CIMAP)”, the research units of “Council of Scientific and Industrial Research(CSIR)” and manufactured & marketed by Aimil Pharmaceuticals.

Mr K K Sharma, Managing director of AIMIL Pharmaceuticals, said “Mr Naik’s statement on BGR-34’s efficacy will further enhance patients’ trust in the medicine. With a strong marketing distribution network spread all over the country, Aimil is strongly committed to carry forward the marvellous benefits of this novel research to the suffering masses all throughout the country and abroad thereby, helping them fight this ever challenging, fast increasing metabolic disorder known to be a silent killer, far more effectively and make them enjoy good quality healthy life.”

Number of post launch studies have been carried out on BGR-34 over the last one year, which have suggested if used in pre-diabetic or mild conditions as monotherapy the drug effectively managed blood glucose homeostasis. In case of chronic and severe instances, it could be used as an adjuvant therapy to synthetic anti-diabetics. BGR-34 is found o provide valuable hepatoprotective, nephroprotective and dislipdemic activities to the advantage of diabetic patients.