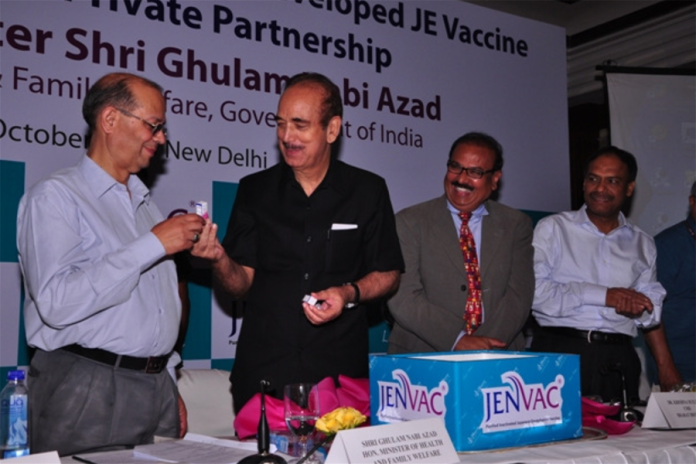 The uniqueness of JENVAC™ is its strength to provide increased immunogenicity and long term protection as a result of unique manufacturing technologies. The virus strain for this vaccine was isolated in Kolar, Karnataka during the early 1980’s and characterized by the National Institute of Virology Pune and the strains were transferred to Bharat Biotech for further vaccine development. The vaccine candidate strain was adapted to vero cell substrate and it is manufactured using novel purification, inactivation techniques with advanced bioreactor technology. The most significant benefit JENVAC™ brings over live attenuated vaccines is that it can be administered during disease epidemics because it is a highly purified and inactivated vaccine.

Dr V M Katoch, Secretary Department of Health Research, Govt of India, said ” JENVAC not only represents as a successful example of developing a totally Indian product of immense public health importance by public -private partnership but also will prove to be a good stimulus to ICMR institutes and other institutions to move fast with their leads to fully developed products by following this route”
In the clinical trials JENVAC™ showed superior safety and immunogenicity, in head to head comparison with the live SA14-14-2 vaccine. JENVAC™ met all its primary and secondary endpoints, in the age group of 1 to 50 years, after 1 or 2 doses of vaccination. Phase III trials showed 98.7% sero-protection 28 days after the 1st dose and 99.8% sero-protection 28 days after dose the 2nd dose. The results proved that JENVAC™ can be administered as a single dose during epidemics for mass vaccination campaigns and also as a 2 dose schedule during routine immunization as part of the National Immunization program in endemic regions. The added benefit of JENVAC™ is its ability to provide long term sero-protection.
Making the announcement after receiving the approval of JENVAC™ by the Drugs Controller General of India (DCGI) Dr. Krishna M. Ella , Chairman and Managing Director of Bharat Biotech, said “JENVAC™ is a product of years of committed R&D. It is yet another clone to clinic milestone for the Bharat Biotech team. JENVAC™ has the potential to reduce disease burden and reduce India’s import of JE vaccines. Bharat Biotech has a long history of developing novel health care solutions through public private partnerships, we hope to continue the same in years to come”
Japanese encephalitis is the most common cause of viral encephalitis in Asia-Pacific. It causes inflammation of the brain, symptoms include high fever, headache, sensitivity to light, stiff neck and back, vomiting, confusion and, in severe cases, seizures, paralysis and coma. The disease which is transmitted via mosquitoes, with pigs and water birds acting as amplifying hosts for the virus, is the leading cause of viral encephalitis in Asia with ~ 50,000 clinical cases reported annually.

The numbers of JE cases are vastly under-reported due to the lack of good surveillance infrastructure in affected countries. According to estimates, JE has infected approximately 10 million children globally, killing three million and causing long term disability in four million children. JENVAC™ has the potential to prevent millions of infections, thereby saving lives and preventing long term disability in millions, not just in India, but also in South East Asia, and Asia at large.

Bharat Biotech will pursue a dual pricing strategy for JENVAC™ to cater to the needs of Government Agencies and those of the private market. The current manufacturing capacity of JENVAC™ is ~ 20 million doses, expandable to 60 million doses based on market requirements. The vaccine is available in both single dose and 5 dose presentations.