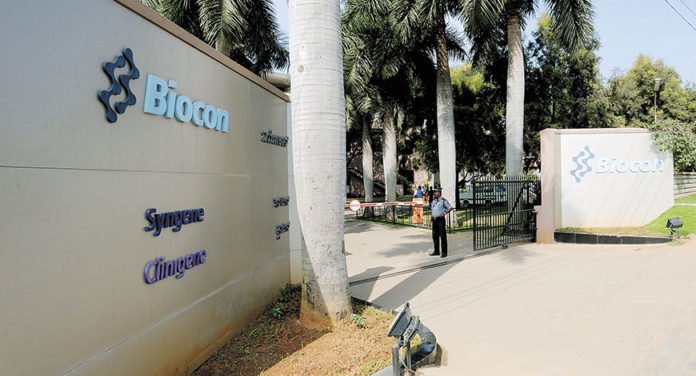 Bangalore: Biocon, Asia’s premier biopharmaceuticals company, has announced that it has delivered a strong performance during the first quarter of its financial year 2016-17.

Commenting on the quarterly performance and highlights, Chairperson and Managing Director, Kiran Mazumdar-Shaw stated, “Our strong performance this quarter has been driven by an all- round growth of our business across Small Molecules, Biologics, Branded Formulations and Research Services. Our Biologics business delivered a growth of 53 percent
driven by the sales of biosimilars in emerging markets.” Listing out the achievements of her company, Kiran mentioned further, “The submission of Pegfilgrastim, our first biosimilar filing in EU, is a critical milestone this quarter. Our Insulins business made a mark with the launch of Insulin Glargine in Japan. In addition, the company received regulatory approvals from MoH, Malaysia, for rh-Insulin and Glargine which will enable commercialization of these products. It is also on track for filing some of our Biosimilars and Generic Formulations in the developed markets later this year.”

Highlights of the Biocon’s performance in the quarter:

In Rs Crore, except growth numbers (As per IGAAP)

Note: Figures above are rounded off to the nearest Cr; % based on absolute nos.

Starting 1 April 2016, Biocon is reporting its financial results based on the new Indian Accounting Standards, referred to as IND-AS. The transition from Indian GAAP to IND-AS applies to both the standalone and consolidated financial statements. In line with IND-AS, it have made changes to the segment reporting to better reflect the way it views and measure the business. This segmental reporting is aligned with the growth strategies represented by the strategic business units: Small Molecules, Biologics, Branded Formulations and Research Services. For the ease of understanding, Biocon will continue to publish Indian GAAP figures alongside IND-AS through FY17.

SMALL MOLECULES
The Small Molecules vertical, which offers a strong portfolio of differentiated APIs across statins, immunosuppressants, specialty molecules and includes its Generic formulations business, reported a steady revenue growth of 9% at Rs 357 Cr, led by sales to India based customers servicing the needs of the US market and to some key markets in the LATAM and Africa & Middle East regions. Several new regulatory filings made during the quarter along with two approvals of key APIs in EU and emerging markets augur well for this business. Company’s vertical integration strategy into Generic Formulations is working well with the completion of â€˜full-cycleâ€™ development of a few products positioning us for regulatory filings in the developed markets, later this fiscal.

BIOLOGICS
The Biologics vertical comprises Novel Biologics and Biosimilars, including rh-insulin, insulin analogs, monoclonal antibodies and recombinant proteins. During Q1, this business reported a growth of 53% to Rs 107 Cr.

Insulins & Analogs: Inroads into Japan & Malaysia
Post regulatory approvals for Insulin Glargine in Japan last quarter, Biocon received a milestone payment from FUJIFILM Pharma (FFP), the partner, this quarter. More importantly, Bioconâ€™s ready-to-use, prefilled disposable pen with 3 ml of 100IU Insulin Glargine was launched in Japan by its partner on July 15, 2016. The product has been developed & manufactured by Biocon, and is being commercialized by FFP. The product has the potential to capture a significant share of the Japanese Glargine market of US$ 144 Mn#, which is the second largest market outside of North America & Europe and is largely dominated by disposable pens. We also launched Insulin Glargine and rh-Insulin in some emerging markets in the LATAM and AFMET regions during the quarter.

Biocon crossed a significant milestone in Malaysia with Bioconâ€™s rh-Insulin becoming the first product manufactured at Malaysia, to be approved for commercialization by the Ministry of Health, Malaysia. Bioconâ€™s Insulin Glargine was also approved by the MOH, Malaysia. These approvals will open up commercialization opportunities for the company and will enable us to address the needs of nearly 3.3 million* diabetes patients in Malaysia. Regulatory filings for several other emerging markets are underway to enable commercial sales from the Malaysian facility.

The development of Insulin Glargine partnered with Mylan is tracking towards regulatory filings in the developed markets during this fiscal. The company visualizes the above developments as significant achievements in the journey of making global impact in diabetes management through affordable biosimilar insulins & analogs.

Monoclonal Antibodies & Recombinant Proteins
The European Medicines Agency (EMA) has accepted its partner Mylanâ€™s Marketing Authorization Application (MAA) for proposed biosimilar Pegfilgrastim for review. This submission represents the first filing in the developed markets, for Biocon and Mylanâ€™s joint biosimilars portfolio. The results from the trials of Biocon and Mylanâ€™s Pegfilgrastim are expected to be presented during the annual congress of European Society of Medical Oncology (ESMO 2016), to be held in October in Copenhagen.

The results of the global confirmatory, efficacy and safety study with Trastuzumab were featured as an oral presentation at the annual meeting of ASCO (American Society of Clinical Oncology) in June. The findings have confirmed the efficacy, safety and immunogenicity of Biocon & Mylanâ€™s Trastuzumab in comparison to branded Trastuzumab. This study is expected to enable regulatory submissions of this product in the developed markets.
The global clinical development of other biosimilar programs like Adalimumab and Bevacizumab are also making good progress to support submissions in developed and emerging markets.

siRNA-based Therapeutics: Partnered Program
Biocon in collaboration with Quark Pharma, one of the leaders in small interfering RNA (siRNA) therapeutics, is developing two siRNA based programs, QPI-1007 and QPI-1024. During the quarter the India arm of the pivotal global Phase II/III study of QPI-1007, a novel siRNA (small interfering RNA) drug candidate for ocular neuroprotection was initiated with the randomization of the first patient. The Drug Controller General of India (DCGI) has given approvals for this first ever clinical trial of a siRNA therapy in India earlier during 2016.

Company’s branded formulations business includes the finished dosages business in India and overseas including UAE. This business posted a healthy growth of 15% at Rs 159 Cr during Q1FY17 led by the sales of core brands in India and UAE.

BasalogÂ, the Insulin Glargine brand in India reported over 30% growth in the quarter which is significantly ahead of the market and InsugenÂ® retained its position as the largest domestic brand of insulins. Two of the anchor brands in Oncology, BIOMAb EGFRÂ® and AbraxaneÂ®, continue to consolidate their positions with over 50% Market Share. CANMAbâ, the brand of Trastuzumab, continues to expand on its strong prescription base with over 25% prescription share. The newly launched Virology division posted a robust growth in the quarter, over 2000 patients have benefited from Hepatitis C franchise in the first year of its launch. Company continued with efforts to invest in scientific engagement for ALZUMAbâ„¢. Four scientific papers for the product are being published at the Psoriasis 2016 Congress in Paris.

Our business in UAE continues to make rapid strides growing at 28%^ which is significantly ahead of the market growth of 16%. This has been led by core brands in Cardiovascular, Anti-Histamines and PPI segments and new launches in diabetes in-licensed from Novartis. The UAE business crossed a critical milestone of AED 100 Million^ on a MAT basis. Jalra and Jalra-M launched last year have made significant inroads in the Anti-diabetes market thereby positioning us as one of the key players in this segment in UAE. The company continues to strengthen its presence in the Cardiovascular market and is amongst the top 10 companies in this segment.
^Source: IMS MAT May 2016

The company’s research services business through Syngene reported a robust revenue growth of 18% at Rs 263 Cr this quarter, driven by a strong performance across its three verticals – Dedicated R&D Centers, Discovery Services and Development & Manufacturing Services. Two new facilities, the first phase of the Syngene Research Centre and a Viral Testing Facility, are now operational, which augurs well for their biologics business. The positive growth and outlook positions Syngene for a strong performance in FY17.