Chennai: In a complex procedure that reflected its commitment to technological advancement with its path breaking work, Fortis Malar took a leap forward by using Extracorporeal cardiopulmonary resuscitation (ECPR) to revive a man nearly 45 minutes after his heart had stopped beating. A team of cardiac experts at the centre of excellence for advanced cardiac care Fortis Malar, Chennai, led by Dr  K R Balakrishnan, Director Cardiac Sciences performed the lifesaving procedure on a 38 year old patient. This therapy involves supporting patient with a portable heart and lung machine and cooling the temperature of the patient down to protect the brain during cardiac arrest.

38-year-old Jaysukhbhai Thaker from Gujarat was suffering from dilated cardiomyopathy leading to end-stage heart failure. He was airlifted from Porbandar and admitted to Fortis Malar Hospital for a possible heart transplant. After being stabilised with medications, he was shifted to a ward.

While awaiting a donor heart, the patient suffered a sudden cardiac arrest and was unresponsive. Cardiopulmonary resuscitation was immediately started and despite attempts for over 45 minutes, there was no cardiac contraction and he was, for all practical purposes, dead. A decision was taken to use ECPR and he was put on a portable cardiopulmonary bypass machine called ECMO (extracorporeal membrane oxygenator) while the CPR was being carried out. Doctors persisted with the treatment and his heart finally started beating after 45 minutes, he remained unconscious for 10 days, after which he woke up. Since ECMO cannot be continued indefinitely, an artificial heart pump or Left ventricular assist device (LVAD) called Centrimag was inserted to support him in the interim. When a suitable donor heart became available, he underwent a successful heart transplant. The patient has now recovered completely and is ready to go home. 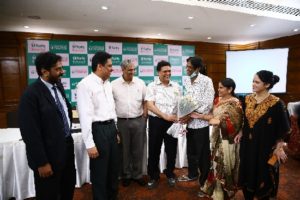 Patient Jaysukhbhai Thaker with the team of doctors at Fortis

Dr K R Balakrishnan, Director, Cardiac Sciences, Fortis Centre for Heart Failure and Transplant, at Fortis Malar, said, “The patient made a steady recovery post the surgery and is now leading a normal life. While mechanical CPR was performed on the patient, ECMO was introduced to revive his heartbeat. This is a perfect example of the success of combining extracorporeal membrane oxygenation (ECMO) with cardiopulmonary resuscitation (CPR) in saving patients during cardiac arrest. Though the procedure was technically difficult and challenging, it is a promising new technology in situations deemed to be uniformly fatal. We have increasingly started using ECPR for “in hospital” cardiac arrest with very good outcomes and are exploring the possibility of extending it to other locations , including outside the hospital, as is done in a few places around the world, like Japan, San Diego and Taiwan.”

“We can increase the chances of survival considerably by using ECPR in a cardiac arrest situation. The miniaturized heart lung machine has enabled us to institute ECPR at any location. With a wide ranging experience in handling cardiac patients, we continue to explore new frontiers and extend the limits of Cardiac Care as we establish Fortis Malar as one of the biggest Cardiac institutions in the world.” said Dr Suresh Rao K G, Chief of Cardiac Anesthesia and Critical Care at Fortis Malar.

Dr Ravikumar, Interventional Cardiologist noted “From a Cardiologist’s point of view ECPR is a wonderful life saving procedure, but under utilized in the cathlabs and coronary care units due to various logistic problems. Fortis Malar has now taken a lead in this very critically useful area and is the first hospital to start this in a formal manner for cardiac arrest patients.”

Cardiac care at Fortis Malar is well established and ranked amongst the finest in the country. Our team of highly accomplished doctors led by Dr Balakrishnan and Dr Rao along with an experienced team of leading cardiac experts have been doing pioneering work in the field. Thanks to their efforts, Fortis Malar today is regarded as a landmark institution for cardiac care that is recognized far beyond Indian shores. We look forward to more remarkable milestones in the future”, said Mr Raghunath, Facility Director of Fortis Malar.

Today Mr Thaker is a happy man and is grateful to God that he was lucky. “I feel I have got a new lease of life,” he said.