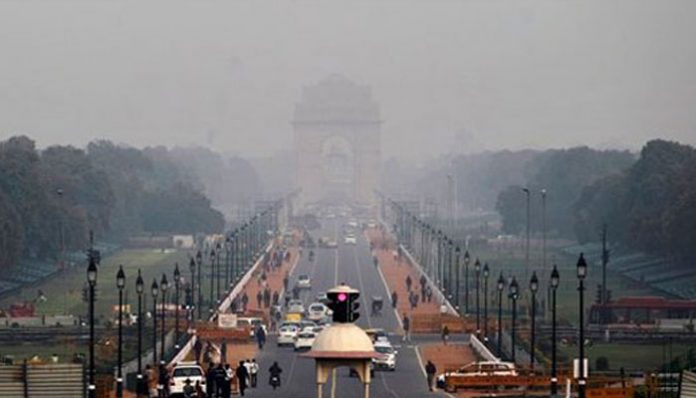 New Delhi: In wake of serious threat to public health in Delhi due to heavy smog, the union government held a meeting to discuss measures to control air pollution. The meeting was held by Secretary, Ministry of Environment, Forest and Climate Change, Mr Ajay Narayan Jha, with senior officers from NCR States viz., Haryana, Uttar Pradesh, Rajasthan, Punjab and NCT of Delhi, to discuss various measures to be taken to control air pollution in NCR.

After detailed deliberations, the state government representatives unanimously agreed that there is a compelling requirement to take immediate measures to control air pollution and that all possible steps will be taken by them accordingly.

It was agreed that action against visibly polluting vehicles, overloading vehicles and vehicles parked against non-designated areas will be further intensified. Lane discipline will be enforced and the PUC regimes will be further strengthened and extensive drives will be undertaken by State agencies and police authorities. The CPCB/SPCBs/DPCC have been instructed to conduct surprise checks and monitor calibration of equipments deployed for PUC certification. Further steps will be taken to promote public transport system by expediting construction of metro rail and procuring additional buses.

The state governments agreed to immediately undertake sprinkling of water on dusty roads, introduce wet/mechanized vacuum sweeping of roads, maintain pothole free roads, black topping/pavement of road shoulders and undertaking greening of open areas of gardens and community places to reduce resuspension of dust being one of the major contributors to PM2.5.

The Delhi Government will ensure that the Badarpur Thermal Power Plant will take all the required steps to prevent suspension of fly ash accumulated over an area of 280 acre in the premises of the plant.

The instructions governing minimization of dust pollution from construction and demolition activities will be strictly enforced, including providing appropriate covers and undertaking control measures for fugitive emissions by water sprinkling, setting up of curtain barriers etc.

All major road construction by agencies will ensure that bitumen burning and use of earth material are done in such a way to minimize pollution, like using of covered trucks for transport of earth etc.

CPCB and SPCBs concerned have also been directed to carryout joint inspection of 17 categories of highly polluting industries located in NCR Region for verification of compliance of emission standards and strict action against violators.

CPCB and SPCBs have also been asked to strictly enforce the recently notified standards for DG sets. Ministry of Power will be requested by MoEF&CC to provide sufficient amount of power to discourage the use of DG sets.

The issue of funding of equipment to minimize straw burning will be taken up with the Ministry of Agriculture and Farmers Welfare for funding the scheme submitted by Department of Agriculture, Government of Punjab, for providing the farm machinery to the farmers for better utilization of paddy straw.

Governments of Punjab and Haryana have been advised to set up bio-mass power plants in large numbers.

Since burning of stubble is a banned activity in all the NCR States and Punjab, it was agreed that the ban on stubble burning needs to be enforced with a greater vigour and spirit by State Governments.

The possibility of imposing a condition during the environment clearance granted to major projects located in Punjab for contribution of funds under CSR towards control of stubble burning was agreed upon.

CPCB will develop an App immediately to report burning of garbage/biomass/dry leaves, including landfill fires, similar to the App developed by FSI to report forest fires. All states agencies and enforcement officers will be linked to the App, which will provide information on fires arising from crop burning/waste burning etc in different parts of the states.

Chairman, CPCB will henceforth review the progress of action taken on measures to control pollution with the concerned State Governments/NCT of Delhi and SPCBs/PCC on a monthly basis.The Ministry will undertake such a review on a quarterly basis.

Rahul Koul - September 5, 2019
275
Mentioned Dr Alok Roy, Chairman, Medica Group of Hospitals in an exclusive interaction with the BioVoice where he shared his views on the issues surrounding healthcare sector in India.................