ICAR-CMFRI scientists prepared the extract from seaweeds which are commonly available in the Indian coastal waters and are natural bounty of the sea and are known for their extraordinary medicinal properties. 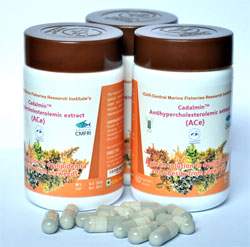 Mr Justice P Sathasivam, Governor of Kerala, released the product during the inaugural ceremony of the Platinum Jubilee celebrations of the ICAR-CMFRI at the Headquarters in Kochi on 18th February, 2017.

Bioactive pharmacophore leads from seaweeds were used to prepare the nutraceutical product. CadalminTM Anti-hypercholesterolemic extract can be administered to regulate clinical indicators leading to dyslipidemia or obesity, total adipose tissue and visceral fat, triglycerides, cholesterol, both good and bad, known as HDL and LDL. The product contains 100% natural marine bioactive ingredients from selected seaweeds by a patented technology, and would be made available in 400 mg capsules.

The nutraceutical does not have any side effects as established by detailed preclinical trials. CadalminTM anti-hypercholesterolemic extract is the only product made by 100% natural marine bioactive ingredients from seaweeds as a natural remedy of obesity and dyslipidemia.