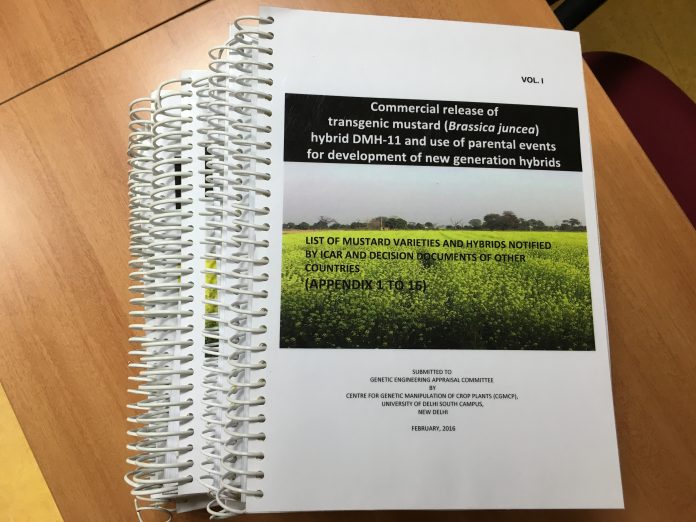 New Delhi: As per the press release issued by South Asia Biotechnology Centre (SABC), more than 4000 pages biosafety dossier of GM mustard packed in VII volumes has been generated over a period of more than 15 years reaffirm the scientific scrutiny, safety and supremacy of Indian regulatory system in assessing biosafety of GM crops in India.

During the public comments period as announced by Ministry of Environment and Forests on October 07, around 759 comments were submitted by experts familiar with the subject of agriculture and crop improvement including the visits of dozens of researchers, students and farmers to ministry demonstrate the public participation and participatory engagement in the process of the commercial approval of GM mustard in India.

In addition to the summary report “Assessment of Food and Environmental Safety (AFES)” of GM mustard, which was made available to public through website on 4th Sept 2016, the biosafety dossier was made available for comments at the Environment Ministry in New Delhi. The GM mustard biosafety dossier is one the most voluminous report on safety, efficacy and agronomic performance of any GM crops prepared by Delhi University South Campus in the history of Indian agriculture. The GM mustard biosafety dossier “Commercial Release of transgenic mustard (Brassica juncea) hybrid DMH-1 and use of the parental events for development of new generation hybrids” consists of following VII volumes;

The GM mustard biosafety dossier has not only been reviewed by Review Committee on Genetic Manipulation (RCGM) but also by Genetic Engineering Apprisal Committee (GEAC) and a Sub-Committee, which was constituted by GEAC on 04 January 2016. The Sub-Committee thoroughly reviewed the technical details and biosafety dossier related to environmental release of genetically engineered (GE) mustard (Brassica juncea) hybrid DMH-11 and use of parental events (varuna bn 3.6 and EH2 mod bs 2.99) for development of new generation hybrids.

“Unfortunately, some groups fundamentally averse to the crop improvement techniques, have gathered, street demonstrated and shouted loudly, without having seen the GM mustard biosafety dossier in last one month and their PR seems to have pronounced the developer of GM mustard guilty. These groups have created apprehensions and propagated fallacies and fears based on their convenience on range on issues including terminator gene, long-term safety, loss of biodiversity, low yield, herbicide tolerant gene and the intellectual property rights,” mentioned the release.

The scientific research community in India has addressed some fallacies propagated by activists and highlighted below some of the important scientific arguments that underpin innovation and reasoning in support of the barnase-barstar technology and GE mustard hybrid DMH-11.