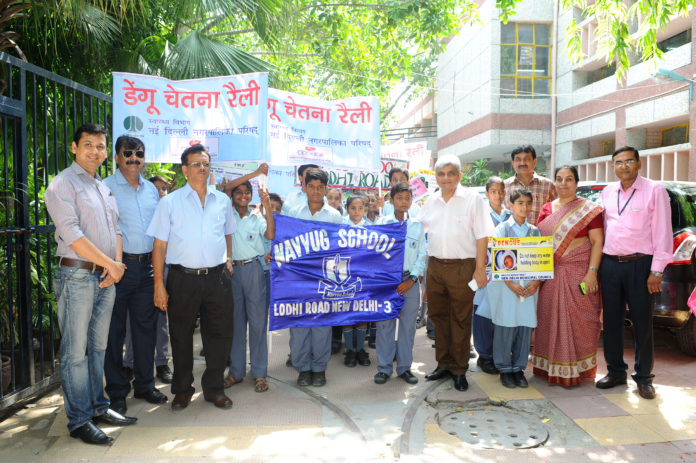 New Delhi: One of the India’s leading alternative healthcare company Dabur India took a step further in its fight against dengue by joining hands with new Delhi Municipal Council (NDMC). Together, they will be organizing school rallies to sensitize the general public, particularly school-going children, on how to prevent themselves from this dreaded mosquito-borne disease.

As a first step, Dabur’s mosquito repellent brand Odomos and NDMC organized the rally in Navyug School, which was flagged off by Delhi Cantt MLA, Mr Surender Singh on August 16, 2016. More than 200 students marched to raise awareness on the importance of keeping their surroundings clean to prevent mosquito breeding and protect themselves from Dengue.

“Dengue has today emerged as the most hazardous disease prevalent during & post the rainy season. According to recent reports, the number of confirmed cases this year is more than twice the number of cases registered in 2015. Contrary to popular perception, Dengue is spread by the Aedes mosquito that is more active during the day-time. Children, when they venture out to play in gardens or even while in school, are at risk of being bitten by these mosquitoes. Even people in offices are at risk of falling sick after being bitten by these mosquitoes. Maintaining a clean surrounding to prevent mosquito breeding, and regular use of Odomos can help fight Dengue most effectively,” Dabur India, Category Head-Home Care, Mr Ramarao Dhamija said.

Dr R N Singh, Chief Medical Officer, NDMC, said, “The fight against Dengue starts with building awareness about preventive measures in the communities where it is most likely to prevail. We, in collaboration with Dabur Odomos, have taken a pledge to completely eradicate Dengue. In order to achieve this, we are organizing rallies in various schools and educating children about the disease.”

As part of this initiative, Dabur and NDMC will also organise a School Contact Programme, which will seek to sensitise the authorities of NDMC Schools and Nodal Officers to implement Dengue protection measures in their schools and offices. Dabur also distributed Odomos to the children free-of-cost as a move to offer complete protection from Dengue causing mosquito. “With this, we are targeting school children to raise awareness about Dengue within their families and community,” Mr Dhamija added.