New Delhi: Memorandum of Understandings (MOUs) were signed by Institute of Chemical Technology with the petro giants Bharat Petroleum Corporation Limited (BPCL) and Hindustan Petroleum Corporation Limited (HPCL) for technology transfer and building commercial scale biomass to ethanol plants entirely based on the technology developed by the DBT-ICT Centre for Energy Biosciences. These plants will be operational by end of 2018.

The MoU with BPCL for setting up of 2G Biomass Ethanol Bio-refinery at Bina, in Madhya Pradesh and with HPCL for 2ndGeneration Ethanol Bio-refinery were signed at a high profile event in Vigyan Bhavan, Delhi on 7th Decmeber 2016 in the presence of Union Ministers Mr Nitin Gadkari, Mr Piyush Goyal, Mr Anil M. Dave and Mr Dharmendra Pradhan. 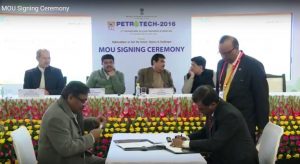 BPCL and Institute of Chemical Technology: MoU for Technology Transfer for setting up of 2G Biomass Ethanol Bio-refinery at Bina, M.P.

BPCL is setting-up 2G Biomass Ethanol Bio-refinery in Bina, MP with a capacity to process 400 tonnes/day of Biomass (equivalent to 100 Kilo Litre/day of ethanol generation capacity). The plant is expected to produce around 32000 KL Ethanol/ year. The purpose of this MoU is to use the DBT-ICT 2G ethanol technology for the proposed plant, which is expected to be commissioned in December, 2018.