New Delhi: The President of India, Mr Pranab Mukherjee conferred Honorary D. Litt on Dr MS Swaminathan at a special convocation of the University of Mumbai on March 17, 2017 in Mumbai.

Speaking on the occasion, the President said it was a rare opportunity for him to confer the Honorary D. Litt. of University of Mumbai upon Dr M S Swaminathan. The University of Mumbai, whose alumni include Mahatma Gandhi has always recognized leaders who have played a transformational role in various fields. Those conferred Honorary D. Litt in the past include eminent scholars and social reformers like Sir R.G. Bhandarkar, Dadabhai Naoroji, Sir C.V. Raman and Sir M. Visvesvaraya.

The President said Dr Swaminathan’s work brought about a sea-change in the life of our nation. It is due to his pioneering efforts that our country transformed from a ship-to-mouth existence to one of the leading producers and exporters of food grains in the world. Over a period of 65 years, Dr Swaminathan has worked in collaboration with scientists and policy-makers on a wide range of problems in basic and applied plant genetics and agricultural R&D. He is considered a global scientist of rare distinction because of the indelible mark he has made on food production in India and elsewhere in the developing world. His advocacy of sustainable agriculture leading to an ever-green revolution makes him an acknowledged world leader in the field of sustainable food security. 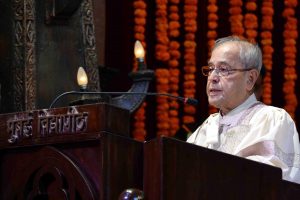 The President said the higher education sector has a crucial role in the national developmental effort. Being the storehouse of traditional wisdom, as also the nursery of new knowledge, the higher education eco-system will influence various growth centres of the economy. Growth of the economy depends on higher education in important ways. The quality of training provided to students employed by the economy determines the level of its competence. Induction of quality manpower is the first point of contact that the economy has with the higher education system. The graduates have to meet the skill-set requirements of the domestic economy. The course work in our campuses must be aligned to the needs of the industry. It will be beneficial to have corporate experts advising academic managers on industrial requirements in the course curricula.

The President said the twenty-first century is expected to be an ‘Asian century’ with the Asian countries regaining their pre-eminence in the world through all-round development. The post Eighties’ performance of the Asian economies is a symbol of this Asian resurgence. One of the important elements that has guided in this journey is education and new knowledge.

The President said ancient India was known for the high level of philosophical debate and discussion it nurtured. India was not a mere geographical expression but it reflected an idea and a culture. Conversation and dialogue are part of our ethos and life. They cannot be done away with. Universities and higher education institutions are the best fora for free exchange of views. We should embrace free conversation and even argument, leaving behind narrow mindsets and thoughts. The lesson for a modern Indian university is to ensure that this great tradition finds new life and vigour within its precincts. There should be no room for intolerance, prejudice and hatred within the spaces of our educational institutions. They must act as flag bearers for the co-existence of multiple views, thoughts and philosophies.