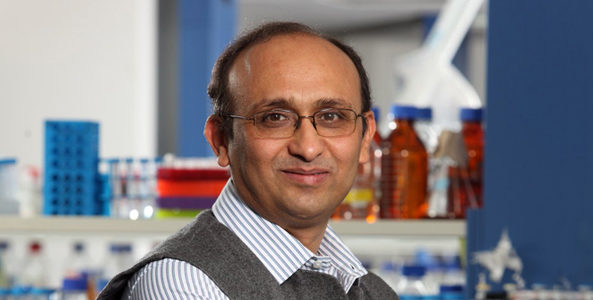 New Delhi: Union government has appointed Dr Rajesh Gokhale as the new Secretary of Department of Biotechnology (DBT), Ministry of Science and Technology. The note from Appointments Committee of the Cabinet stated that Dr. Gokhale will take over from Renu Swarup, who is set to retire on 31st October, 2021.

Dr. Gokhale is the former Director of CSIR-Institute of Genomics and Integrative Biology  (CSIR-IGIB). He has led interdisciplinary initiatives that have spawned new avenues in the area of functional genomics research and healthcare. He is also Co-founder of Vyome Biosciences (VYOME), a biopharmaceutical company developing best in class drugs for dermatology care utilizing genomics knowledge. He has previously worked as Staff Scientist at National Institute of Immunology as well.

Dr Gokhale’s scientific contributions have earned him international recognition in understanding tuberculosis pathogenesis, with a focus to understand complex cell envelope coat of mycobacterium – a unique feature of this pathogen. His research has provided new insights into the chemico-cellular trestle of mycobacteria, providing new opportunity to delineate remarkable dormancy dynamics of this infectious agent. He has now set up a major  programme in the area of understanding skin pigmentation homeostasis, with particular interest in delineating chronic unpredictable disfiguring disorder vitiligo.

After completing his M.Sc in Biotechnology from IIT Bombay, Dr Gokhale did his Ph.D. from Indian Institute of Science (IISc), Bangalore, in the area of Protein Folding and Stability and then carried out postdoctoral work at Stanford University in Polyketide Synthases and secondary Metabolite Biosynthesis. Earlier, he did his graduation in B.Sc. Chemistry from Delhi University. “Since Biotechnology was a new group then, there was a tremendous emotional connect between faculty members and students of IIT Bombay and it turned out to be a truly inspiring and determining phase of my career. Other activities on-campus and the H8 folks, C1Rites specially, all are very special to me,” he remarked.

He is a member of several Scientific Advisory Committees and is also a section editor of Tuberculosis journal and on the advisory board of Natural Product Reports. He is a Fellow of Indian National Science Academy (F.N.A.), New Delhi, Fellow of the National Academy of Sciences (F.N.A.Sc.), Allahabad, and a Fellow of Indian Academy of Sciences (F.A.Sc.), Bangalore. Dr. Gokhale is furthermore, a Honorary Faculty member with Jawaharlal Nehru Centre for Advanced Scientific Research, Bangalore.

Dr. Gokhale is a sports enthusiast and strongly believes that sports is a great leveler and thus crucial to maintain balance in life. His other passion is reading.