New Delhi:  Scientists from the University of East Anglia (UEA) will release underwater robots to monitor how ocean conditions influence monsoon rainfall.  Meanwhile collaborators from a partner project led by the University of Reading with collaborators across the UK and India will use a state-of-the-art aircraft to take atmospheric measurements at the same time.

The project worth £8 million is being funded by the Natural Environment Research Council, the Newton Fund, the Indian Ministry of Earth Sciences (MoES) and the UK’s Met Office. It is being hoped that the combined results of this large-scale scientific campaign will help forecast the arrival of the Indian monsoon more accurately than ever before.

Dr M Rajeevan, secretary for the Indian Ministry of Earth Sciences was expected to visit the ship and meet the research team this afternoon before its departure.

As well as improving rainfall prediction, the research could revolutionise subsistence farming, improve the livelihoods of millions of people, and help mitigate the damage caused by monsoons when they hit land. The researchers claim that nobody has ever made observations on this scale during the monsoon season itself and this makes it a truly ground-breaking project.

Summer monsoons provide 80 per cent of annual rainfall to around a billion people in India. Forecasting the precise timing and location of the rains is vital to the region’s economy, which is dominated by farming, and for managing its increasingly pressured water resources. Accurate predictions of intense downpours and breaks in the monsoon are essential to help farmers plan their crop planting and communities prepare for floods and droughts.

Last year, the monsoon spread rapidly over northern India, causing devastating damage, whereas prolonged breaks in 2009 led to a severe shortage of rainfall and poor harvests.

Lead researcher Prof Adrian Matthews, from UEA’s School of Environmental Sciences, said: “The Indian monsoon is notoriously hard to predict. It is a very complicated weather system and the processes are not understood or recorded in science.

Prof Mathews added: “We will be combining oceanic and atmospheric measurements to monitor weather systems as they are generated. Nobody has ever made observations on this scale during the monsoon season itself so this is a truly ground-breaking project. We are aiming for a better understanding of the actual physical processes. What we have now are imperfect models for predicting monsoon rainfall when it hits land, so this will create better forecasts.”

“Ultimately, the goal is to improve the prediction of monsoon rainfall over India. This will be enormously beneficial for India’s subsistence farmers, who need to know when and how much rain will fall. This would then enable them to change the timing of how they plant their crops. We hope that it will also help to mitigate international disasters caused by extreme rainfall and flooding. “We also hope to better understand how the southern Asian monsoon affects the whole world’s climate,” he added. 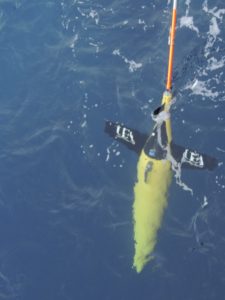 The Bay of Bengal Boundary Layer Experiment (BoBBLE) is led by UEA scientists in collaboration with the University of Reading and the National Oceanography Centre (NOC) in Southampton. Scientists  will release underwater robots in the Bay of Bengal to monitor how ocean conditions influence monsoon rainfall.

The UEA team will arrive in India today and are due to set sail on June 24 from Chennai into the Bay of Bengal on the Indian research ship the Sindhu Sadhana.

Once out in the ocean, they will then release seven underwater gliders to measure ocean properties such as temperature, salinity and current. The team will spend a month at sea – with data from the 250-mile stretch of international water beamed back to the UK using mobile phone signals daily.

Back in the UK, researchers at UEA, the University of Reading and NOC, will use this data to create computer models of the ocean to determine how it affects weather systems and rainfall over India.

“Our collaborators will be flying out from Bangalore to make simultaneous observations in the atmosphere above us. It will be really rather spectacular,” added Prof Matthews.

Previous missions undertaken by UEA’s fleet of gliders have helped researchers make a variety of discoveries including why the Antarctic ice caps are melting.