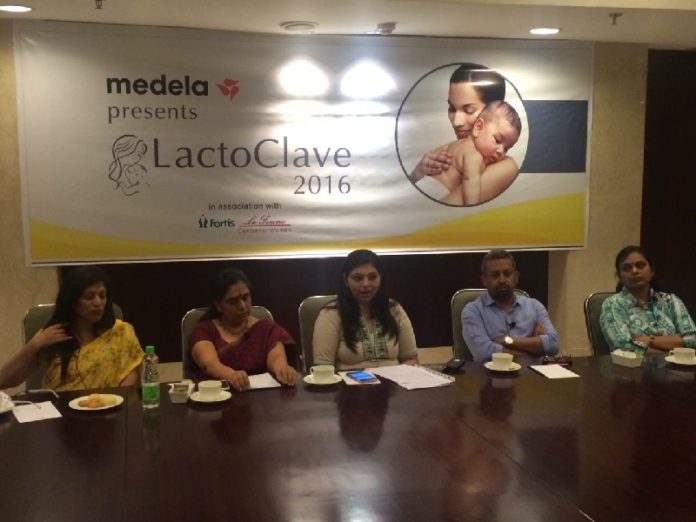 New Delhi: India has the highest number of deaths due to premature births and ranks 36th among the number of pre-term births globally. A large number of infants don’t survive due to poor feeding practices in the country. Mother’s milk is the best and first source of nutrition for babies. WHO recommends that pre-term and low birth weight infants should be fed with mother’s milk and when a mother is unable to express milk, then a Human Milk Bank is the only alternative.

Medela India, the world’s leading global producer of breast pumps and nursing accessories on June 17, 2016, organized the second edition of LactoClave 2016 an initiative to bring together experts and discuss the need and importance of mother’s milk. For its second edition LactoClave was organized in association with Fortis La Femme Hospital and the topic was ‘Human Milk Banks- Banking on Mothers Milk’.

With an aim to educate new and expecting mothers on the utility and benefits of a human milk bank, this conclave brought together Gynaecologists, Neonatologists and Lactation consultants from Fortis Hospitals in an innovative webinar format. The panel discussion gave mothers from all over the country an opportunity to participate in an event which acted as a great source for facts and insights on human milk banks in India.

Present on the occasion was Dr Raghuram Mallaiah, Director Neonatology, Fortis La Femme who highlighted that human milk banks are not an age old concept. “The first milk bank in India was set up way back in 1989 in Mumbai. However, there has not been enough awareness generated around the necessity and utility of milk banks. Human milk is a life saviour especially for pre-term and low birth weight babies. Its acts as a stop gap measure for infants who don’t have access to mother’s milk due to various health reasons. Human milk is the best and safest feed for a baby next to mother’s own milk”.

A human milk bank is the best and only source of human milk next to mother’s milk. Pasteurised human milk is said to be absolutely safe for consumption. Since there is huge demand supply gap due to low awareness, it is an unorganised sector in India.

Adding further, Dr Anita Sharma, Lactation Consultant, Fortis La Femme elaborated “A lot of mothers have surplus milk even after establishing lactation with their own babies and identification of such mothers are important so that they can come forward and donate milk for vulnerable babies who really need it. A breast pump is very vital for donor mothers as it helps them express milk in a better and safer way as compared to manual pumping. Mothers can use a variety of breast pumps from manual to electric to help them express excess milk”.

Talking about mother’s milk, Dr Lata Bhat, Head, Department of Neonatology, Fortis Hospitals, Noida said “Mother’s own milk is best suited to a child as it evolves over time and is tailor-made according to the child’s requirements. Mother’s milk is rich in essential nutrients and prevents the child against a host of fatal diseases and infections. It also leads to better brain development of the child. However, in the absence of mother’s milk, any other human milk is the best possible alternative”.