New Delhi: Spinal Muscular Atropy is an autosomal recessive genetic disorder, which means an affected individual must have two defective copies of the disease causing gene. One copy of the defective gene is inherited from each parent. The disease that affects the control of muscle movement is caused by a mutation in survival motor neuron SMN1.

While there are many patients in India whose tales won’t be known to us but we have recently come across a story of New Delhi based child, Garvit who is suffering from the disease and needs financial help. As per his father, Mr Praveen Tyagi who desperately posted on facebook seeking government’s help in medical aid for his son, “My Life was very smooth and became lovely when I was blessed with a baby boy Garvit, We enjoyed every moment till he was 6 month old. He was then diagnosed with a non-curable disease called SMA. We were into a deep shock. Why me??. I left my job and sat in a depressed state for 1 yr at home. Since then we have struggled for 6 yrs now, in search of some cure.”

The family does not have any huge financial backup. Mr Tyagi adds further, “No financial and emotional support was another killer for us.” His only hope is the Sprinza developed by the United States-based biotech giant, Biogen, which has been developed after 10 years of research and is being claimed to cure the disease by upto 40 percent.  However, Mr Tyagi says that only 40 such families are known to him in India and in order to be heard by Indian government or in US, we need to explore atleast 1000 such families. “Kindly help us by sharing this message. Any one knowing any SMA patient kindly mail at [email protected],” he mentions in his appeal to general public.

Biogen, which is licensing Spinraza from Ionis Pharmaceuticals, has been quoted in reports to have said that the one dose will have a list price of $125,000. That means the drug will cost $625,000 to $750,000 to cover the five or six doses needed in the first year, and about $375,000 annually after that, to cover the necessary three doses a year. 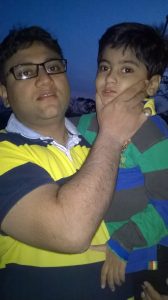 Mr Praveen Tyagi with his son Garvit. He says that only 40 such families are known to them in India and in order to be heard by Indian authorities or in United States, they need to explore atleast 1000 such families. He has requested the citizens to help him in reaching out to health ministry for help. Any one knowing any SMA patient may mail him at [email protected]

On August 12, 2016, Biogen and Ionis announced that Spinraza had met its primary endpoint in an interim analysis of ENDEAR, a double-blind, sham procedure-controlled trial testing Spinraza in infants with SMA type I. As a result, the trial was ended early and all participants were transitioned into SHINE, an open-label extension trial. On December 23, 2016, the FDA announced that it has approved Spinraza for SMA, making it the first-ever approved therapy for SMA.

Traditionally there has been no cure for SMA. Treatment consists of managing the symptoms and preventing complications. Muscle relaxants such as baclofen, tizanidine, and the benzodiazepines may reduce spasticity. Botulinum toxin may be used to treat jaw spasms or drooling.

Symptoms in an infant: