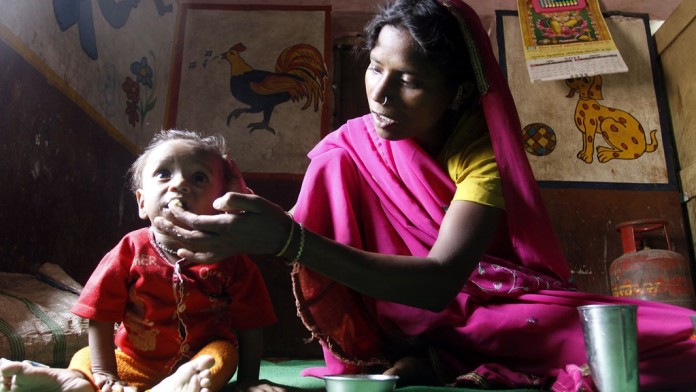 Did you know that 1 million children die in India every year from an unacceptable disease, severe acute malnutrition? This means nearly one child death every thirty seconds. These children suffer from extreme hunger; they have low weight and swelling. Yet this disease is entirely treatable and preventable-these children who cannot eat normal food anymore need specific treatment.

Too many children die needlessly. Significantly more needs to be done. The bitter truth is that it occurs in a context where the Indian economy is growing rapidly. To address this, ACF-India (Action Contre La Faim-Action Against Hunger) and Fight Hunger Foundation, today, launched the “Generation Nutrition Campaign” with a vision to end child deaths from acute malnutrition in India. The launch was marked by an event held in New Delhi, titled, “Acute Malnutrition – An Everyday Emergency”, inaugurated by Mr Sudarshan Bhagat, Minister of State for Rural Development, Government of India.

At the event, ACF-India, also, launched the “Acute Malnutrition: An Everyday Emergency” reports from Burhanpur District, Madhya Pradesh and Baran District, Rajasthan. These reports throw light on the malnutrition situation in the two districts analyzing the infant mortality rates and child deaths due to conditions which are preventable.

Generation Nutrition is a global campaign, calling on Governments and the international community to take urgent action to prioritize the fight against acute malnutrition and save the lives of millions of children under the age of five. In India, the campaign focuses on highlighting the issue of Severe Acute Malnutrition in children under five years of age in India. The campaign urges the Government to recognize Severe Acute Malnutrition as a medical emergency and take urgent preventive action to avert India’s nutrition crisis.

The sessions and panel discussions covered a wide range of topics to address the burning issue of malnutrition in India. These included a situation analysis of acute malnutrition as an everyday emergency, keynote addresses by the ministers on the steps to be taken by the Government of India in eradicating malnutrition, innovative partnerships in nutrition emphasizing on contribution of corporate organizations, sports, youth, international academia etc. The event ended with a perceptive session on potential areas for future funding in nutrition.

Dr Rajiv Tandon, Deputy Country Director, ACF-India, said, “At the onset, we are extremely honored to see the initiatives taken by Mr Narendra Modi, Prime Minister of India, in the areas of development, governance and social sector reforms. Severe Acute malnutrition is a medical emergency today with an alarming about 80 lakh children in India suffering from it. We appeal to the Prime Minister and the Finance Minister to take urgent action to address the issue of Severe Acute malnutrition to ensure that these children who are mostly in rural and tribal areas of India survive and thrive. We request the government to ensure adequate budget allocations, appropriate policies, convergent action at block level for implementing quality programs equitably. This will help in improving the social infrastructure and human capital in India”.

In his keynote address, Mr Sudarshan Bhagat, expressed, “Malnutrition is a big challenge for the entire global community. In India, 42% children are underweight in proportion to their age and 52% children look younger than their actual age. The Government of India is taking these issues very seriously. Nutrition and education are the birth rights of every child in India. Government is currently implementing several initiatives and programs to address the problems of hunger and malnutrition at district and block levels. As reiterated by the Prime Minister of India on several occasions, our national mission or ‘Abhiyan’ is to build a modern India where poverty and malnutrition are eradicated. I intend to take the outcomes of this conference directly to the Prime Minister and other authorities”.

Mr Thomas Gonnet, Executive Director, ACF-India, set an urgent context for the issue of malnutrition in India: “India is one of the top five high burden countries for acute malnutrition. I believe that a collaborative approach involving governments, civil society organizations such as ACF, the Fight Hunger Foundation and others, and the international communities will be a strong force to make the world free of child deaths from acute malnutrition within a generation. Everyone can engage in the campaign, by signing the petition to call world leaders to set up international targets for reduction of acute malnutrition. Find out more at generation-nutrition.org”.