New Delhi: Realizing that salt reduction in India requires a multi-stakeholder effort that can take into account the growing incidence of hypertension and cardiac diseases largely resulting from intake of sodium beyond the WHO recommended guidelines of 5 mg per day, the George Institute for Global Health in association with Arogya World organized the Salt Summit in the Capital here today.

A first-of-its kind multi-stakeholder forum, the summit brought together key representatives from the government, food industry, academic and research organizations, civil society representatives and the media to deliberate on the growing body of evidence that links various non-communicable diseases to high salt intake and a strategy for salt reduction in India. 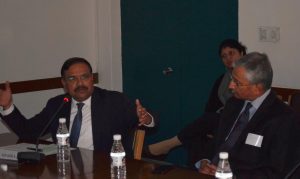 Inaugurating the Salt Summit, the Health Secretary, Mr C K Mishra, said that the NCD’s are now recognized by the Government of India as a major health issue and figures as part of the National Health Mission. “The Ministry will be starting a universal screening program from April onwards covering five NCDs namely diabetes, hypertension, oral, cervical and breast cancers,’’ he informed adding that mortality is more because detection is very low,” he informed.

“In India, we need action from the government of India, food manufacturers, private sector, restaurants, street vendors, cafeteria managers, housewives, civil society and academic and research community,” said Ms Nalini Saligram, CEO, Arogya world, adding that this was the first time such a diverse group of people have been brought together to discuss ways to salt reduction strategies.

“We call on each stakeholder group to initiate action and report back on progress made every year at the annual Salt Summits that we plan to organize from this year.  We hope to showcase meaningful action from each stakeholder group in India against the important salt reduction target. Nothing less than the health of future generations in India is at stake,” she added.

Several studies carried out in the developing countries, including India, have been reporting an increase in the prevalence of diet related chronic non-communicable diseases (NCDs) like overweight and obesity, diabetes mellitus, hypertension, other cardiovascular diseases (CVDs), cancers etc., especially among urban population.

“Raised blood pressure is one of the leading risk factors for global mortality and is estimated to have caused 9.4 million deaths and 7% of disease burden – as measured in DALYs − in 2010,” said Dr Vivekanand Jha, Executive Director, George Institute for Global Health, India.

The prevalence of raised blood pressure in India is around 26 percent and is considered to be a leading cause of death, stroke, myocardial infarction, congestive heart failure, and chronic renal impairment. “About 1 in 3 of all adult Indians have high blood pressure, by itself making it a major public health burden. Five out of the top 10 causes of deaths in India are now due to NCDs. What is more alarming is the inexorable rise in the contribution of NCDs to all deaths, presenting a challenge for health community,” Dr Jha added.