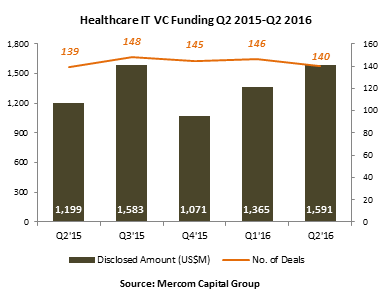 New Delhi: Mercom Capital Group, a global communications and research firm, released its report on funding and mergers and acquisitions (M&A) activity for the healthcare information technology (IT) also known as the digital health sector for the second quarter of 2016. Mercom’s comprehensive report covers deals of all sizes across the globe.

Venture capital (VC) funding in the health IT sector, including private equity and corporate venture capital, came in at $1.6 billion in 140 deals in the second quarter of 2016 compared to $1.4 billion in 146 deals in Q1 2016; it was also up 33 percent compared to the same quarter of last year. So far in the first half of 2016, close to $3 billion has been raised in 286 deals, a 50 percent increase compared to nearly $2 billion raised during the same period in 2015.

“The big reason for the jump in VC funding was record fundraising by Chinese companies. This is the first time since 2010 that Health IT companies in the U.S. have been outraised by other countries,” said Raj Prabhu, CEO and Co-Founder of Mercom Capital Group. “This quarter is likely an outlier, but it is also a sign that investors and companies should pay close attention to Digital Health markets around the world.”

VC Funding for U.S. companies fell by almost 37 percent quarter-over-quarter (QoQ) and Chinese companies for the first time emerged as the top Healthcare IT funding recipients.

Total corporate funding raised in the sector (including VC, Debt, Public Market Financing, and IPOs) for Q2 2016 totaled $1.7 billion compared to $1.5 billion in the previous quarter. There was one IPO by NantHealth for $91 million. 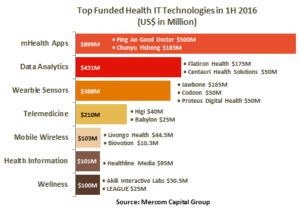 The top funded areas in Q2 were mHealth apps with $779 million, Data Analytics companies with $234 million, Wearables and Sensors with $129 million, Mobile Wireless with $75 million and Wellness with $60 million.

There were 43 early-stage deals at or below $2 million, including 12 accelerator and incubator deals.

A total of 282 investors, including three accelerators/incubators, participated in Healthcare IT deals in the second quarter of 2016, with 20 investors participating in multiple rounds. Khosla Ventures was involved in four deals.

Healthcare IT VC funding in the second quarter of 2016 originated from 12 countries worldwide. China topped the list bringing in $733 million in three deals, accounting for 46 percent of total funding. Funding fell sharply in the United States by almost 40 percent QoQ; this was the lowest funding quarter for American Health IT companies since Q1 2015.

Data Analytics and mHealth Apps were involved in the most M&A deals in the first half of 2016 with 11 each.

There are a total of 549 companies and investors covered in this report.