New Delhi: “It is our endeavour to protect each and every child in the country from vaccine preventable diseases. This is a new milestone towards expanding the coverage of full immunization in the country aimed at reducing child mortality”, Mr J P Nadda, Union Minister for Health and Family Welfare stated this as he announced the expansion of the Rotavirus vaccine under its Universal Immunization Programme (UIP) in five additional states in function at Agartala. The Health Minister further added that the Government is committed to reducing morbidity and mortality in children. Strengthening routine immunization is an essential investment in India’s children and will ensure a healthy future of the country, he noted. 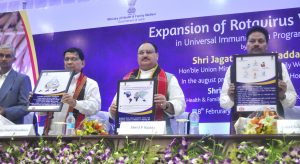 Recognizing immunization as a crucial intervention in reducing the country’s child mortality, Mr J P Nadda stated that “Diarrhoea is one of the biggest killers in children and Rotavirus is one of the most common causes of severe diarrhoea in children less than 2 years of age. Rotavirus vaccine along with proper sanitation, hand washing practices, ORS and zinc supplementation will go a long way in reducing the mortality and morbidity due to diarrhoea in children.” He further added that the “The government is also committed to increasing the full immunization coverage and ensuring that the benefit of the life-saving vaccines is provided to every child. The fourth phase of Mission Indradhanush has already begun in North-eastern states – Arunachal Pradesh, Assam, Manipur, Meghalaya, Mizoram, Nagaland, Sikkim and Tripura from 7th February 2017 and will be rolled out in rest of the country in April 2017” and urged the states to “successfully roll out of the mission which has already created a significant impact across the country.”

“This life-saving vaccine will not only improve the health of our children but will also reduce hospitalization and other conditions associated with diarrhoea due to Rotavirus such as malnutrition, delayed physical and mental development among children.Reduced hospitalization reduces the economic burden on the family and the health cost burden on the country”, Mr Nadda said. He further stated that the Rotavirus vaccine has been developed indigenously, under a public-private partnership by the Ministry of Science and Ministry of Health and Family Welfare. This, therefore, is a landmark achievement under ‘Make in India’ initiative, he stated.

Appreciating the plan of expansion of Rotavirus vaccine in Tripura, Mr Badal Choudhary, Minister of Health & Family Welfare, Revenue & Public Works, Government of Tripura, stated that rotavirus vaccine will reduce morbidity and mortality among children from rotavirus diarrhoea and will benefit more than 53000 children in Tripura. He also informed that JE vaccine has also been added in the RI program in Tripura. Mr Choudhary further highlighted some state related health issues regarding Tripura and requested for support from the central government.

In March 2016, the Rotavirus vaccine was first introduced in four states namely Haryana, Himachal Pradesh, Andhra Pradesh and Odisha. Till date, about 38 lakh children have been vaccinated with Rotavirus vaccine in these four states. Now, the vaccine will be expanded to five more states of Assam, Tripura, Madhya Pradesh, Rajasthan and Tamil Nadu. Currently, India has the one of the number of deaths due to diarrhoea in children under the age of 5 years. Globally, diarrhoea is responsible for 5,76,000 child deaths every year.

India’s UIP provide free vaccines against 11 life threatening diseases, to 26 million children annually, the largest birth cohort in the world. The Universal Immunization Programme provides life-saving vaccines to all children across the country free of cost to protect them against Tuberculosis, Diphtheria, Pertussis, Tetanus, Polio, Hepatitis B, Pneumonia and Meningitis due to Haemophilus Influenzae type b (Hib), Measles, Rubella, Japanese Encephalitis (JE) and Rotavirus diarrhoea. (Rubella, JE and Rotavirus vaccine in select states and districts)

Also present at the function were Mr Vandana Gurnani, Joint Secretary (RCH, IEC), Dr Shailesh K Yadav, Mission Director (NHM), Government of Tripura along with the other senior officers of the Health Ministry and Tripura Government and representatives of development partners such as WHO, UNICEF, PHFI etc