Going out from the confines of the office premises Swachhta drive was carried out in Agricultural Mandis, Fish Markets & villages near each Krishi Vigyan Kendras (KVKs). During the Pakhwada focus was laid to put certain measures that are dynamic and to be continued beyond Pakhwada period. 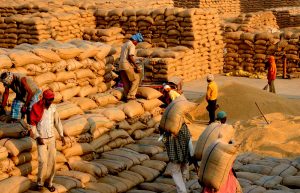 Cleaning drives were undertaken in 271 Agricultural Mandis. Further, Swachhta Action Plan has been prepared in which it was decided to make provision of Rs 10 lakh for each mandi for setting up waste management plants under e-Nam scheme. It was also decided that under one flagship scheme, namely RKVY, managed by DAC&FW one percent funds will be spent on Solid and Waste Management. Compost Machines are being installed in the Mandis in coordination with States.

i. Cleaning of 50 wholesale & retail Fish markets in 15 states was done and also awareness about maintenance of cleanliness was spread during this drive.

ii. Cleaning of Institute Buildings and premises by all the Subordinate institutes under Fishery Division.

• Members of Parliament, State Fisheries Minister from West Bengal, Mayors and Councilors from Kerala and Tamil Nadu, Senior officials from the State Fisheries Department, District Collectors etc. actively participated in the Swachhta Pakhwada activities. Minister of State for Agriculture & Farmers Welfare, Mr Parshottam Rupala also participated in cleanliness activities at Amreli (Gujarat). Also, the Fish vendors, retailers, net makers, students, staff and trainees of the institutes, members of fisherman associations and general public were also involved in the various activities under taken during Swachhta Pakhwada across the State/UTs. The awareness camps/cleaning drives were taken up across the country with the help of State/UT Governments. Some of the notable activities were held in Bilaspur and Durg in Chhattisgarh, Guwahati, Silchar, Cachar in Assam, Bishnupur in Manipur, Nellore in Andhra Pradesh Cuddalore and Nagercoil in Tamil Nadu and also in Kolkatta Bangalore, Lucknow , Ranchi and Kochi.

• Department of Agricultural Research & Education/ Indian Council of Agricultural Research, celebrated Swachhta Pakhwada during Oct 16-31, 2016. The ICAR Head Quarters in New Delhi, all the 102 Research Institutes and 648 KVKs took active part in the Pakhwada activities and conducted a wide range of activities which included, cleaning of campuses, residential areas, villages and localities in their vicinity in addition to conducting Seminars, awareness camps, rallies, street plays and expert talks. Through KVKs and institutes promotion of Swachhta activities was done in 3040 villages with the active participation of farmers and village youth. Efforts were made to promote clean farming technologies and package of practices and make best use of farm waste. Central and local leaders, Senior Officers from the Institutes and the ICAR Headquarters participated in the events organised at various places across the country during the pakhwada. IARI, New Delhi has set up a team of sanitation inspectors in each block of their residential complex who organise the dry and wet waste generated from each household separately and recycle it appropriately through the participation of households. On 27th October, 2016 a special Seminar on the topic “Creating Wealth from Agricultural Wastes” was organised at KVK Shikohpur (Gurgaon) in which Minister of State of Agriculture and Farmers Welfare Shri Sudarshan Bhagat was the chief guest. Various technologies making best use of agricultural wastes like, preparation of bio compost, vermin-composting, whey utilization, straw enrichment, waste water recycling, cotton waste management, fisheries waste management and engineering technologies were showcased. More than 350 farmers and Scientists participated in the event. Based on the daily and final reporting of the swachhta activities, the awards shall be given to the outstanding performers in the competitions announced for offices in ICAR Head Quarters, ICAR Research Institute and KVKs and these awards will be given on the foundation day of the ICAR.

• In order to sensitize state governments, a video conference was held on 27.10.2016 with representatives of States/ UTs and they have been briefed about the “Swachhta Pakhwada Activities”. They have also been requested to make adequate provisions in their existing Schemes to prepare Compost from farm wastes. Further, DD Kisan has been asked to make two films- one of Solid Waste Disposal Technology of NCOF and the second on Liquid Waste Disposal technology developed by ICAR. DD Kisan will show these films in their existing programmes.

• Rivers play an important role in Swachh Bharat Abhiyan. Ganga is a symbol of cleanliness as well as purity since time immemorial in India. To make the Ganga clean again, it is imperative that organic farming should be promoted in the townships and villages along the banks of the Ganga to minimize the use of harmful pesticides, fertilizers and other chemicals in agriculture. This Ministry has signed a Memorandum of Understanding on 16th September 2016 with Ministry of Water Resources, River Development and Ganga Rejuvenation (MoU). Under this MoU, the people living in 1657 clusters of 1657 Gram Panchayats from Uttarakhand to West Bengal will be motivated to carry out organic farming to reduce use of polluting chemical fertilizers and pesticides to ensure that the Ganga is restored to pristine purity.