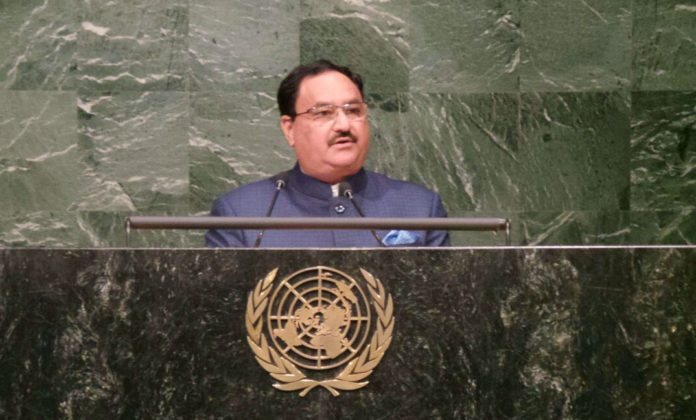 New York/New Delhi: At a high-level meeting on ending AIDS that opened at the United Nations General Assembly on June 08, the member states adopted a new political declaration that includes a set of time-bound targets to fast-track the pace of progress towards combating the worldwide scourge of HIV and AIDS over the next five years and end the epidemic as a public health threat by 2030.

In his address to the UNGA, Mr J P Nadda, health minister of India mentioned “I am happy to join all of you today for this High Level meeting on HIV/AIDS. I also commend the efforts of the Permanent Representatives of Switzerland and Zambia for steering the difficult negotiations of the draft Declaration to a successful conclusion.”

“We have come a long way in our collective fight against the spread of the AIDS epidemic that had engulfed large sections of population across the world.  Strong political will and concerted targeted action over the last decade and a half have contributed to strong achievements in pushing back the epidemic,” added the health minister.

In India, the number of HIV affected people living on antiretroviral therapy has increased substantially and the number of annual AIDS-related deaths has gone down considerably over the period of last few years.  These remarkable successes have demonstrated that the target of ending the AIDS epidemic by 2030 could be realistic for India.  Sustained political commitment and action is necessary to address the scale of challenge that still lies ahead.

UN General Secretary, Ban Ki Moon however reminded the nations that the HIV threat was far for over. “Over the next five years, we have a window of opportunity to radically change the trajectory of the epidemic and put an end to AIDS forever. Despite remarkable progress, if we do not act, there is a danger the epidemic will rebound in low- and middle-income countries,”  he added.

The Secretary-General called on the international community to reinforce and expand on the “unique, multi-sector, multi-actor approach” of UNAIDS, and to ensure that the annual target of $26 billion in funding, including $13 billion for the next three years, is met.

“It means continued advocacy to the most vulnerable groups; and approaches that promote gender equality and empower women. It means leaving no one behind and removing punitive laws, policies and practices that violate people’s dignity and human rights,” Mr Ban said.

Rahul Koul - December 9, 2020
290
In an exclusive interview with BioVoice, Managing Director of J Mitra & Company, Jatin Mahajan shared his views on various aspects related to COVID-19 besides the details of his company’s latest activities, and much more.......................