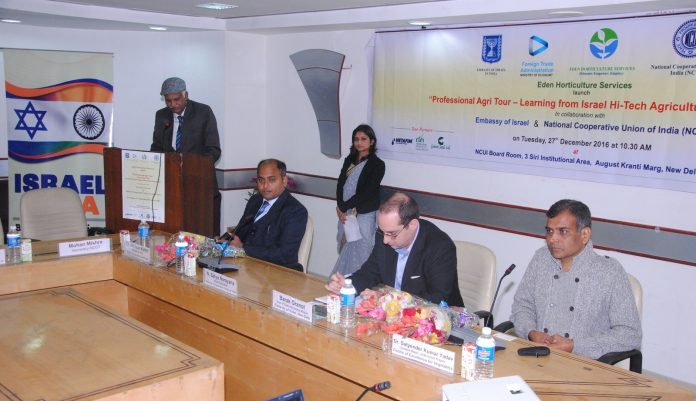 New Delhi: Dr Akhilesh Kumar believes that for entrepreneurs wherever is problem, there is an opportunity and thus for an agriprenuer, India is full of opportunities. His startup, Eden Horticulture Services recently launched their “Professional Agri tour to Israel” programme on the occasion of silver jubilee year celebration of diplomatic relation between India and Israel. This event was organised in collaboration with India’s apex cooperative body National Cooperative Union of India (NUCI) and Embassy of Israel on 27th December 2016 at NUCI board room.

Dr Akhilish has spend four years (2010-2014) in Israel while pursuing his postdoctoral research at Volcanic enter (Ministry of Agriculture Research Organization) and decided to switch over his career from basic science research to the applied science research as agripreneur.  During his stay in Israel he was actively involved in Indo Israel collaboration in agriculture sector and after coming back India he joined Centre of Excellence for Vegetables (An Indo Israel Project) at Gharaunda in Karnal. While working there he realised horticulture sector could be profitable business if anyone does in precise way under protected cultivation but because lack of guidance and latest technology our farmers are unable to encash it.

He believes that agriculture sector also has been divided into several domains and there is lack of coordination among them. He made his start-up with team of experts from India and Israel who has expertise in Vegetable science, Floriculture, Biotechnology, Micro irrigation and solar engineer so that they can provide all required information and know how technology under one umbrella to their client. The motto of Eden Horticulture Services is Educate-Empower-Employ. They are making educational project at school to give real exposure of plant science to the children, who are studying effect of temperature, humidity, photosynthesis, transpiration and irrigation only in books but not able to observe its effect under natural condition. Eden is providing training and consultancy services not only in rural and urban area but also in tribal area like keonjhar in Odisa. In those tribal area people are now making plug seedling in coco-peat sterilized media and enjoying its benefits. Moreover to Eden is going to publish one bimonthly Horticulture magazine very soon to spread hi-tech agriculture knowledge in India.

“Several Israeli companies are looking for suitable business partner for joint venture in India, but face obstacles because of different business ecosystem.”

During the course of his work, Dr Akhilesh realized there are many people in India willing to invest in agriculture but they are confused about promising module of agriculture and allied sector technology like hydroponics, post harvest management, dairy and poultry trunk key project etc. “On the other hand there are several Israeli companies are looking for suitable business partner for joint venture in India but face obstacles because of different business ecosystem. Naan-Dan-Jain irrigation success story is best example of such joint venture. To promote such B2B and B2P level collaboration such professional Agri tour would be very beneficial for both countries under the supervision of Indian and Israeli experts.” he says.

During event, Mr N Satyanaryan, Chief Executive, NCUI talked about the country’s cooperative movement that claimed 8 lakh cooperative are playing an important role in doubling the income of farmers. Whereas From Israeli Embassy Mr Barak Granot (Head of Economic and Trade Department) said India and Israel is going to complete 25 years of their diplomatic relation in 2017 and we are looking forward for exponential growth in trade and business between us. India and Israel collaboration has been always win-win situation for both nations. He endorsed Eden’s Agri tour would be certainly constructive in this direction and gave his good wishes to this initiative.

This event was very unique juncture for horticulture scientist, cooperative like NAFED-KRIBHCO-IFFCO and founder of several Agri start-up like BeePositive, AgroNxt, Kisan Sanchar etc. Moreover several Israeli companies representative like Genesis seeds, Netafim, Top Green and Herman Zemel also showed their presence as Eden’s tour partner. This event was good networking platform for all participants and they wished to such event more frequently. Those people who are interested in Eden Horticulture Services activities may visit their website www.edenhorti.com for more details.