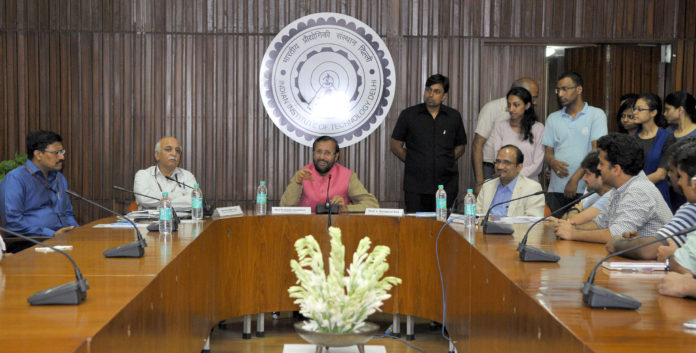 New Delhi: Union HRD Minister Prakash Javadekar exhorted the student community to concentrate on ideas that will change the fate of India, while addressing the faculty and students of IIT-Delhi today. On his maiden visit to a Central higher education institute after taking charge of HRD Ministry, he expressed immense happiness of the venue being IIT-Delhi.

He said he was greatly overwhelmed after interacting with the research scholars of the institute and by the aspirations of many of them to become good teachers. ”I will go and tell our PM that here are the students who will change our nation”, he expressed his happiness. In this context he added that this aspiration reflects their concern for this nation and our people and their belief in quality education for transformation of India.

He said he was excited to hear about Start-ups set up in some hostel rooms and wished every room be start-ups of great ideas and generate immense wealth for our nation. Recounting the great tradition of IITs and contributions of the alumni in all the sectors, he dismissed the general perception that majority of IIT students go abroad and work. He mentioned, he was told that 7 out of 10 IIT alumni work in India and contribute towards the development of our society.

Modi Govt is committed to position IITs among the best institutes of the globe, the minister said. Referring to the 2000 faculty vacancies in all the IITs, he expressed confidence of it being filled with enthusiastic researchers within. He also stressed on Government’s commitment to improve the quality of the research in IITs and lists out schemes like Uchhatar Avishkar Yojana (UAY) and Imprint. Under Imprint, Rs1000 Cr has been allocated to upgrade the research infrastructures to meet the technological challenges of the nation. A plan of Rs. 240 Cr has been formulated in UAY to promote real partnership between Industry and Academic community. Unnat Bharat Abhiyan is yet another programme to promote innovation to solve the challenges of Rural India.

He concluded his interaction with the assurance,”The dialogue with you has only begun and it will continue”

Before the function the Minister was given a presentation on IIT-Delhi and its activities. A brief review of Academic Programmes, Outreach programmes including Unnat Bharat Abhiyan (UBA, Research activities and infrastructure and Development Plans was taken by the Minister. He interacted with the academic heads, administrators and students in separate sessions. He also visited the exhibitions showcasing some of the innovations by IIT researchers.