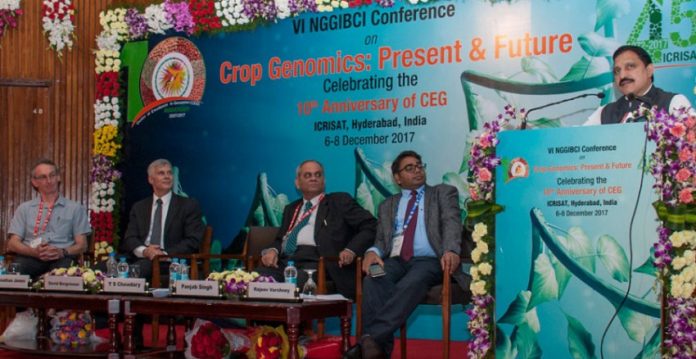 Hyderabad: The time taken to develop improved crop varieties has almost halved with the rapid strides made in genomics research and the last decade has seen the genomes of eight crops sequenced. This includes pearl millet and groundnut which are important for the nutrition and livelihoods of smallholder farmers in the drylands of sub-Saharan Africa and India. These achievements have emerged from the advanced genomics research being carried out at the Centre of Excellence in Genomics (CEG) at the International Crops Research Institute for the Semi-Arid Tropics (ICRISAT).

Established in 2007, CEG is celebrating a decade of using modern genome analysis methods with the goal of delivering crop varieties that are better adapted to poor soils, low rainfall, high climate variability and pest and diseases that will help improve the livelihoods of smallholder farmers. CEG was set up in collaboration with the Department of Biotechnology (DBT), Government of India.

CEG has been recognized both nationally and internationally, for its work in high-throughput molecular genotyping and phenotyping technologies, which have been made available to a wide range of public and private research institutes in India. The decoding of genetic information of important dryland crops led to the discovery of many new crop breeding tools like single nucleotide polymorphisms (SNPs) genetic markers for faster and more targeted crop improvement programs. CEG’s work has helped develop drought-tolerant or disease-resistant varieties of groundnut and chickpea, key to improving Indian smallholder farmers’ productivity and climate resilience.

Presentation of the brochure celebrating ten years of the Centre of Excellence in Genomics (CEG) to Chief Guest Mr YS Chowdary, Minister of State for Science & Technology and Earth Sciences, Government of India, and other dignitaries, at ICRISAT, Patancheru

Speaking at the international conference ‘Crop Genomics: Present and Future,’ organized to celebrate the anniversary, Chief Guest Mr YS Chowdary, Minister of State for Science & Technology and Earth Sciences, Government of India, said, “The work being done at CEG in decoding the genome information of dryland crops like chickpea, groundnut and pigeonpea will serve the national mission of doubling farmers’ incomes.” He added, “We need to upscale such science and their applications to improve profitability for farmers and improve nutrition for farmers and consumers.” Elaborating on the need for capacity building the Minister said, “We need to go from 300 to 3000 students as we scale up the application of genomics in modern crop improvement to double farmer incomes.”

Dr David Bergvinson, Director General ICRISAT, said, “We have decoded the genome sequences of our mandate crops and demonstrated the utility of sequence information in crop improvement. This is the way of the future as we bring diverse disciplines and leading institutions around the globe together to address food and nutritional security. ICRISAT can serve as a hub to integrate traditional Systems Biology with a holistic framing based on a global network of institutions connecting plant science with microbiome (soil, gut), nutrition, health and education.”

“We started this journey in 2007 with a grant from the Department of Biotechnology, Government of India, with an objective to provide marker genotyping services and train scientists in the area of molecular breeding. Now CEG has emerged as center for high-quality science, translational genomics and training at the international level,” said Dr Rajeev Varshney, Director, CEG and Research Program Director, Genetic Gains, at ICRISAT.

Working in close collaboration with scientists from ICRISAT and 184 partner institutes from 35 countries, the CEG has published over 350 research articles in high impact journals. Apart from sequencing important crops, another important dimension of CEG is building the capacity of national partners from across the world with over 300 scientists trained in the state-of-the-art crop breeding techniques. Scientists at CEG have been honored with more than 42 awards and fellowships for their contributions to agricultural sciences. Over 370 delegates from 139 institutes and 34 countries are attending the three-day conference.