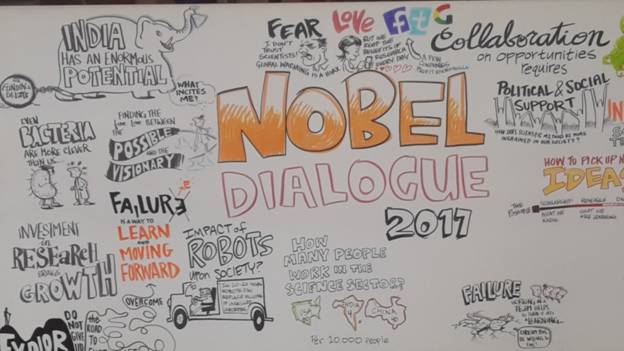 New Delhi: While participating in the Nobel Prize Series as a part of Vibrant Gujarat Summit, the several Nobel laureates have opined that India has a great potential to be a scientific power and it should invest more in basic and fundamental research areas. The themes of the dialogue were captured by artists as they were speaking to a huge gathering of scientists, students and general public as a part of the first Nobel Prize Series being held in Ahmedabad in conjunction with the biennial summit of Vibrant Gujarat.

Interesting discussions ranging from getting rid of mosquitoes to tackle malaria, research for finding out new vaccines, genetic modification of food crops and the need for strengthening education particularly science education were discussed at these two sessions.

The first dialogue was introduced and moderated by the Secretary, Department of Biotechnology, Government of India Prof K Vijay Raghavan and the second by the Deputy Chairman, Nobel Foundation Dr Goran K Hansson. Several students and Scientists posed interesting questions to Nobel Laureates.

Dr Venkatraman Ramkrishnan pointed out that there is a lot of scope for research on vaccines in India. Dr Richards Roberts pointed out that 125 Nobel Laureates have signed in favor of Genetically modified food crops and that opposition against them is unjustifiable as about 800 million people world over go without food every night. Dr Randy Schekman said that India with a history of having had Nalanda University over 1000 years before the first university in other parts of the world should think of having a high-quality affordable education system. The Laureates said that they shared their ideas with the Prime Minister at a dinner meeting that they had with Mr Narendra Modi on Monday evening.

The dialogue is part of the Nobel Prize Series, India 2017, formally inaugurated by the Prime Minister, Narendra Modi, on 09th January. The Nobel Prize Series Science Exhibition, also inaugurated by the Prime Minister at the Science City in Ahmedabad is meanwhile attracting large number of people. The five week long Science Exhibition being set up by the Nobel Foundation, with exhibits from the Nobel Museum, Stockholm, Sweden.

As a run-up to these events, a nationwide Ideathon contest was organised that invited ideas from students that could address any challenges faced by society. The ideas were reviewed by a panel of experts and about 150 students from across the country were selected and have been invited to participate and meet with the Nobel Laureates.

A Memorandum of Understanding was signed last year by Nobel Media and the Department of Biotechnology (DBT), Ministry of Science and Technology, Government of India for hosting Nobel Prize Series in India for the next five years.

After this agreement, a trilateral Memorandum of Understanding was signed between the Department of Biotechnology of Government of India, the Government of Gujarat and the Nobel Media. Accordingly, the first of the Nobel Prize Series, India 2017 is being held as a prelude to Vibrant Gujarat to demonstrate how science and discovery underpins all enterprise and human well-being under the overall theme of “Science Impacts Lives”.

Rahul Koul - June 27, 2022
56
Click to watch the full interview Abhishek Mohan, Founder and Chief Executive Officer, HempStreet has been in the startup space for over 15 years now....