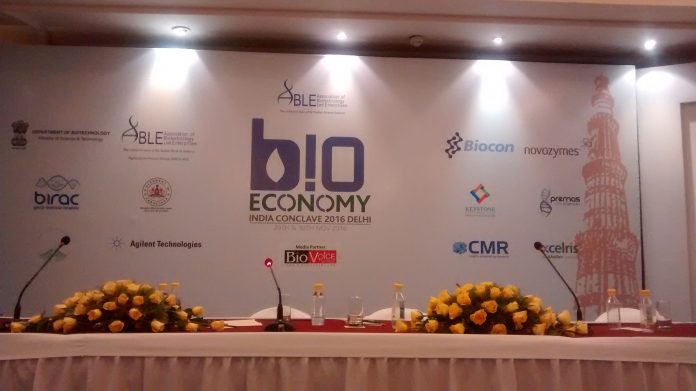 New Delhi: The BioEconomy India Conclave 2016 was the India’s first premier conference focused on biotechnology and its impact on the economy. Hosted by the Association of Biotechnology Led Enterprises (ABLE), this event provided an opportunity to discuss, debate, partner and contribute to bringing about the transformative change in economic development through the power of biotechnology.

The conclave held on November 29-30th at Delhi was attended by all stakeholders of the bioeconomy such as researchers, technologists, entrepreneurs, and businesses that are driving innovation in healthcare, agriculture, industrial processes, renewable energy and beyond through products and services. The idea behind the initiative is to have a vibrant bioeconomy that is driven by meeting the societal needs of food, fuel, health and environmental sustainability.

The first day of the event was packed with the sessions on important topics and will be attended by the ministers and top government officials alongwith the prominent voices from the industry.

In his inaugural address, Mr P M Murali, President, ABLE and Managing Director and CEO, Evolva India, mentioned, “India has rising demand for bioscience products. Climate change can affect the overall environment, drastically leading to drought in a country which is dependent on agriculture. The projected target for pharma is close to $300 billion and for biotech, it is $100 billion. Therefore, the combined target by 2025 is $400 billion. I see India as a leader. We are currently around $35 billion, we need to get to $100 billion soon and this would propel manufacturing and employment. People forget that by doing this, a huge social infrastructure will also develop around it, which is good for the country and its general economy.”

“Typically small organizations do research and get sold off to big MNCs after they achieve some success. I feel this model will be broken shortly. We have to bear in mind the need for healthy regulation. Between intent and delivery of technology, public attitude has determined the implementation of the technology. Each type of innovation can have incremental, disruptive or destructive effect. Evidence based technology should not fall prey to the fear mongering.  The reaction should be based on logic not emotional responses. We are looking forward to work with the NITI Aayog to together work towards a stronger Indian bioeconomy by 2025,”added Mr Murali.”

The event was attended by close to 300 delegates cutting across various industry verticals. The stakeholders debated, networked, and explored partnership opportunities to bring about the potential of transformative change in economic development through the power of biotechnology.

Talking about the major objective behind the event, Dr Kiran Mazumdar-Shaw, Honorary Non Executive Chairman of ABLE, and CMD at Biocon mentioned, “The conclave aims to create a nationwide awareness of the economic potential of Biotechnology across various sectors viz Healthcare, Agriculture, Energy and Sustainable solutions for Industry. It also aims to bring policy makers, the Departments of Biotechnology, the ministries of Health, Food & Agriculture, Environment, the Department of Industrial Policy & Promotion (DIPP), and NITI Aayog onto a common platform.”

Mr G S Krishnan, Regional President, Novozymes, India in his comments told BioVoice News, ”BioEconomy Conclave event has been held at the right time, especially when there is lot of attention for sustainable solutions from the government. In the industrial biotech segment we covered, food, textile, detergent and bionergy. We see a big opportunity for growth.”

Policymakers advise industry to be patient, work with the government

In her speech, B Meenakumari, Chairperson, National Biodiversity Authority (NBA) emphasized on the need to safeguard the biodiversity of the country. Few years ago, only few were aware on this fact that there are biodiversity laws applicable in the country. There are exemptions to the Indian people using the country’s traditional knowledge. Accessing bioresources for Indian nationals is free but when it comes to specific biomolecules, patent laws apply. Yet the law enforcement is lacking in most of the cases.

Dr K Vijay Raghavan, Secretary, Department of Biotechnology, mentioned, “Scientific churning of biodiversity data can be a step towards bioeconomy. Focused efforts to generate data. Industry and government institutes can assess that.” Calling market failure as a major challenge, Dr Raghavan said that it requires to be bridged. “We require huge resources and capacities. CEPHI is an initiative that can make a difference in the times of Ebola and Zika. Our involvement depends on your competitiveness.

In response to the question by Dr Kiran M Shaw on the inability of Gurgaon to attract the industry despite a huge incubator and how could government play a role to facilitate its leveraging, Dr Raghavan stated that there is a need to convert talent into innovative solutions besides moral bosting. “Investments are required a multiple levels.

On biodiversity laws, the DBT Secretary candidly pointed out that there is difference between desire and applicability. “Changing rules to make them favourable to industry has to go through checks and balances. DBT and environment ministry are working together on this,” said Dr Raghavan.

As per Dr Amita Prasad, Additional Secretary, Ministry of Environment and Forests, “People should have confidence on their government. Biosafety capability building project is currently underway. Lot much can be done and we are exactly looking at doing what best possible can be done within the framework.”

“Currently 85 products are in pipeline. There are objections from the NGOs and 780 comments have been received on the GM Mustard. There is an ongoing SC case. Communication gap is huge. About 21 government institutes are involved. Lot of trust deficit,” she said when asked by a member of audience on the status of the GM Mustard.

Biovoice news was the official media partner of the BioEconomy Conclave 2016. The live updates were provided to readers via twitter handle @BiovoiceNews under the hashtag #BioEconomyConclave2016

Dr S R Rao, Senior Adviser, Department of Biotechnology agreed to the sentiments that there are complications in the biosafety regulations. Dr Rao elaborated, “There are lawsuits by the firms even involving the Genetic Engineering Appraisal Committee (GEAC). We have to muster courage for mustard. Mechanism of communication on genetically modified crops requires recheck. The definition of who consist of public and who actually are the stakeholders need to be reviewed.”

Mr G Ramamohan, Director and Regulatory Policy and Scientist Affairs was of the view that the context of risk within agriculture biotechnology is not defined properly. “Public perception has been blinkered and driven by the beliefs and emotions which is not correct. Policymakers need to be storytellers,” he said.

Dr Suryakumar Srikrishnan, Acting CEO, C-CAMP, stated that no enough biomass is available in India. If we convert entire available biomass in India into biofuel yet it won’t fulfil the goals. Ocean agriculture is an option as terrestrial plants won’t match the requirements. Biostimulants for plants can help in 45 percent increase. The ICAR institutes are already using it.

The late evening session of the first day witnessed VOICE FOR BT, a public speaking contest to encourage undergraduate students from colleges to speak passionately on topics such as biofuels, nutrition and water conservation.The national contest was supported by Novozymes, a world leader in biological solutions. Mr G S Krishnan while anchoring the show called the contest a platform to promote right talent and boost the morale of student community.

While the winner was Mr Adarsh Raj, the first runner up was Ms Sraddha Satpathy. The cash prize of Rs 30,000 and six months training was awarded to the winner while the runner up got Rs 20,000 and six months internship respectively. The participation certificates to all the contestants from different zones were also presented to the eight participants. These eight speakers had made it to the grand finale after a gruelling contest in their respective regional selections – West, South, North and East.

The 2nd part of event on November 30th too witnessed intense deliberations on various topics, especially the sessions on boosting innovation ecosystem in the country was the key highlight of the day.

Note: The full story on the BioEconomy Conclave alongwith the key highlights will be featured exclusively in ‘December 2016’ edition of Biovoice E-magazine.