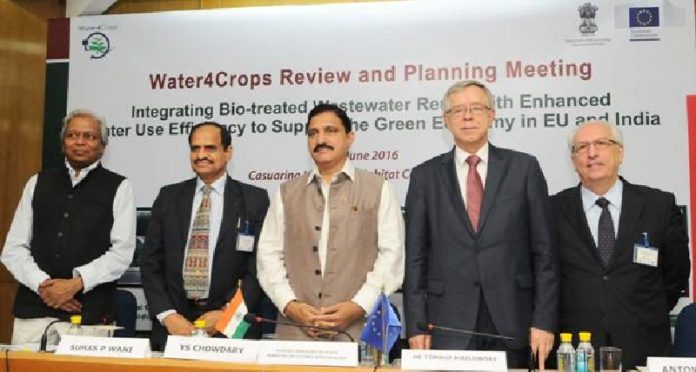 New Delhi: Review meeting on the completion of 4 years of€ 9 million Indo-EU ‘Water4crops’ project is being held from 15–17th of June, 2016 at New Delhi. Co-funded by Indian government through its Department of Biotechnology (DBT) under the Ministry of Science and Technology along with the European Union, this project integrates bio-treated wastewater reuse with enhanced water-use efficiency to support the Green Economy in EU and India.

The ‘Water4Crops’ project provides an opportunity to efficiently utilize low-quality industrial, domestic and municipal wastewater by facilitating the development of various technologies for wastewater treatment at the local scale and its feasible use in agriculture.

Rationale behind developing Decentralized Wastewater Treatment (DWT)is water scarcity. On one hand, direct use of wastewater in agriculture is not good for farmers and consumers and on the other, disposal of untreated wastewater pollutes the environment. Moreover, all localities do not have sewage treatment plants.

The minister of State for the Ministry of Science and Technology and Earth Sciences, Mr Y S Chowdary, chaired the inaugural session of the Review and Planning Meeting on the completion of 4 years of project on June 15 at New Delhi.

Mr Y S Chowdary, speaking at the inaugural session, noted that water is clearly a worldwide challenge today and if a Third World War ever happens, it would be for water. “Hence, its management requires new approaches and technologies. He highlighted the importance of treated wastewater for addressing the issues of sanitation and health in rural areas as well as meeting the demand of scarce water resources for agriculture to improve the livelihoods,” he said.

Prof K VijayRaghavan, Secretary, Department of Biotechnology noted that the European Commission’s Framework Programme 7 (FP7) and the Department of Biotechnology initiative has promoted the sharing of research and technologies among participating consortia in India and Europe for the benefit of the common people. He further said that the ‘Water4Crops’ is one of the largest Indo-EU collaborative projects in which the European Commission contributed €6 million through its ‘Water4Crops-EU’ project and a similar project, ‘Water4Crops-INDIA’, was funded with €3 million by the Government of India.

Mr Tomasz Kozlowski, Ambassador of the European Union to India, said that this project is a good example of how top-level research organizations from several European countries have joined forces with their counterparts in India to develop concrete solutions able to benefit both sides. We continue this collaboration with India through the EU-India Water Partnership, he added.

Based on pilot studies at ICRISAT headquarters in Hyderabad and elsewhere, several watersheds have been supported under the Government of Karnataka’s Bhoo Samrudhi and Rythu Kosam programmes and by some Corporates under their Corporate Social Responsibility (CSR) programmes.The Decentralized Wastewater Treatment (DWT) approach is being implemented and popularized at 28 sites in the Indian states of Telangana, Andhra Pradesh, Maharashtra, Uttar Pradesh, and Karnataka.

As a result of this initiative, the chemical and biological oxygen demand in waste waters has reduced by 30-92%. Moreover, crop yield evaluations have shown increased yields of the order of 14 to 40% for crops like okra, brinjal and chilly irrigated with treated wastewater as compared to fresh water. In addition to increased yields, the secondary treatment of waste water for agriculture leads to more tertiary-treated potable water being available for domestic use.

The EU Consortium includes 21 partners from 8 Countries and the India-based consortium consists of 11 research and development partners led by the International Crops Research Institute for the Semi-Arid Tropics (ICRISAT). Other partners on the Indian side are National Environmental Engineering Research Institute (NEERI), MS Swaminathan Research Foundation(MSSRF), The Energy and Resources Institute (TERI) and Euro-India Research Centre (EIRC), among others.