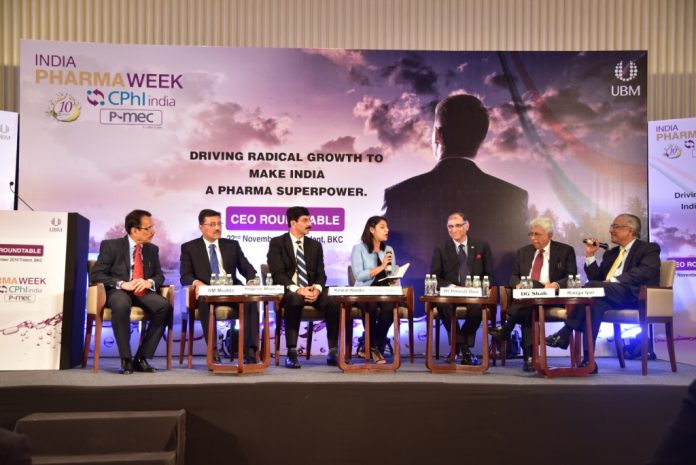 Mumbai: The launch edition of the India Pharma Week, a UBM India initiative to celebrate the 10th anniversary of its flagship pharma event, CPhI and P-MEC, witnessed one of its most significant events, the CEO Round Table, in association with West Pharma.

The exclusive, closed-door round table was a congregation of India’s most influential CEOs, Presidents & Founders from leading pharmaceutical companies, and Policymakers and senior representatives from pharmaceutical associations who engaged with one another on the vital issue of what it would take to Drive Radical Growth to make India a Pharma Super Power.

The strategic gathering among the acknowledged leaders of the industry also helped deep dive into thought-provoking discussions on achievements and supplementary challenges around policy making, industry growth and sustainability in an endeavour to achieve the target of USD 300 billion in value for the Indian pharma industry by 2030.

Significantly, a detailed White Paper Report was prepared on the recommendations provided by thought leaders and will be presented to policy makers and other key stakeholders.

Disrupting the pharma space with innovations, rather than vanilla growth, and pumping in greater investments in the pharma industry in the national spends.

Bringing in rural India within the pharma ambit, by use of e-commerce and strengthening its infrastructure by leveraging technology making health insurance compulsory in order to increase patient volume.

Speaking on the occasion of the CEO Round Table, Mr Yogesh Mudras, Managing Director, UBM India said, “As we congregated for this elite knowledge sharing session, we confronted the Indian pharma industry at a very crucial juncture in its growth trajectory. While India is fast growing into a global pharmacy hub and ranks amongst the top three pharmaceutical markets in terms of volume of produced drugs, it ranks only 14th with a size of $13 billion ( in 2015) from the angle of commercial value. The reasons and solutions for this gap were discussed by the noted master strategists who drive business in the pharma sector. The CEO Round Table is an extremely proactive initiative with the White Paper Report that will be presented to relevant policy makers and continuously monitored.”

Single dose vaccine, Sputnik Light, authorized for use in Russia

17.15 crore vaccine doses to states free of cost, more on its way: GOI