New Delhi: “Prevention of disease will always remain in the forefront, whether for Communicable or Non-Communicable Diseases, and awareness regarding a balanced lifestyle and healthy living is a crucial pillar in combating non-communicable diseases”, mentioned Mr J P Nadda, Union Minister of Health and Family Welfare while speaking at the inauguration of “National Conference on Prevention and Control of Major Non-communicable Diseases in India”, on June 22 at Delhi.

Mr J P Nadda stated that as most of the major NCDs, generally labeled as ‘lifestyle diseases’ are acquired, there is an urgent need for paying attention to their preventive aspects. Social behaviour change plays a major role in preventing the NCDs, he stated.  Emphasising on the need for creating wide awareness among the people regarding healthy living, the Health Minister today launched a media campaign on NCDs that shall leverage on different media forms.  Mr Nadda said that following in the vision of the Hon. Prime Minister through his message of Yoga and holistic healthcare by integrating traditional systems of medicines and practices, the International Day of Yoga was observed across the globe recently. He stated that Yoga and knowledge in AYUSH system of medicine can be of great help in not only preventing but also controlling non-communicable diseases. Stating that traditional system of medicines can complement modern medicine, the Health Minister said that Yoga is not only physical activity but also a complete science of living.  Yoga as an intervention is being encouraged as an integral part of NCD prevention and management, said Mr Nadda. 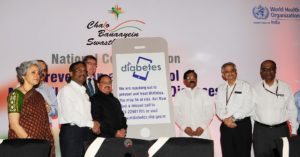 The Health Minister launched the M-Diabetes initiative which harnesses the power and potential of the vast mobile telephony network. With a missed call to 011-22901701 the caller can get more information on Diabetes and how to prevent and manage it. One can also log on to www.mdiabetes.nhp.gov.in for more information. Minister also launched the guidelines for screening of Diabetes, Hypertension and Common Cancer. “I am sure that the guidelines shall help the program managers in planning and implementing the screening at mass level” Shri Nadda said. In addition, the Minister launched Training Manuals for different levels of health workers who are engaged in NCD prevention and control, survey of risk factors for NCDs to generate prospective national level estimates.

Mr Nadda also launched the II round of Global Adult Tobacco Survey (GATS-2) for systematically monitoring adult tobacco use and tracking key tobacco control indicators. GATS-2 will interview about 76,000 non-institutionalized males and females aged 15 years and above, from about 2,500 selected geographical units across the 30 States and 2 Union Territories. Minister also released the 1st issue of ‘Healthy India Initiative’ magazine, a quarterly magazine by CHEB on addressing health issues of common man.

Mr B P Sharma, Secretary (Health) stated that diseases, including NCDs impose a high financial burden on the families. He stressed on the need for a multi-sectoral and convergent approach for prevention and control of NCDs, where the States also essay a crucial role.

Dr Saumya Swaminathan, DG, ICMR said that there is a huge potential for control and prevention of NCDs through early screening. She emphasized on understanding the social-economic and cultural contexts in countering the rising NCDs and laid stress on social behavior change.

Dr Henk Bekedam, WHO Representative to India, highlighted the importance of Yoga in preventing and control of NCDs, especially Diabetes. He stressed on the need for multi-sectoral efforts and said that risk factors are closely related to social behavior. Dr Bekedam further added that NCDs are high on global agenda and maintained that the focus should be on advocacy, awareness, access, alliance and accountability.