New Delhi:  During his recent trip to India, the renowned spiritual guru and author of 85 books, Mr Deepak Chopra spoke on the importance of meditation to cut down the side effects of cancer treatment. “We have to understand that only drugs won’t work,” he said.

Elaborating on this, Mr Chopra who an Indian American author, public speaker and alternative medicine advocate opined, “It was remarkable to find that during our observations that regular meditation is helpful. There are tremendous positive effects. We found that the telomerase activity could also be significantly controlled to the benefit of cancer patients.”

It is important to note that the the increased activity of telomerase enzyme leads to uninhibited growth of cells leading to the cancerous proportions. Many cancer cells are considered ‘immortal’ because telomerase activity allows them to divide indefinitely, which is why they can form tumors.

On antibiotic resistance, he mentioned, “There are 23 thousand human genes and 2.2 million bacterial genome. But the injudicious use of antibiodies has led to the destruction of the balance between the two. More people die in hospitals. Antibiotic resistance is emerging as a threat across globe.”

US based author who was in India to launch the Jiyo App mentioned that meditation could also help even the patients Alzheimer’s and other infectious diseases.

On the huge medical data generated in the institutes, Mr Chopra said, “We have terabytes of data that lies with institutes across US but it is still not fully used.” 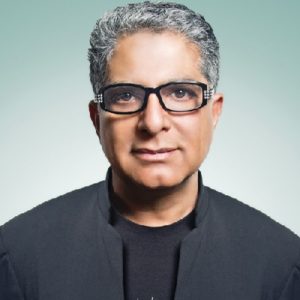 On a positive note, he said that he was optimistic on the emerge technologies and research on subjects such as epigenetics besides the alternative medicine that would be the key to reversal of diseases. “Chronic illness too could be treated. We are the cusp of major revolution,” said the author whose work has been translated in over 43 languages, including 22 New York Times bestsellers.

Mr Chopra also referred to supergenes and said, “5 percent of gene mutations are penetrants. Only 1 gene (BRACA) predicts cancer. Others are lifestyle influenced ones.”

On policy matters, he feels that government must democratise healthcare. “Everyone needs personalized, participatory healthcare system,” he concluded.