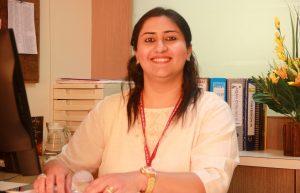 About Author: Dr Anuradha Vaidya, a Ph.D in biotechnology, from the prestigious National Centre for Cell Science (NCCS), Pune, is currently the Deputy Director of Symbiosis School of Biomedical Sciences (SSBS), Symbiosis International University (SIU) situated at Lavale, Pune. Dr Vaidya is also coordinating the activities of Symbiosis Centre of Stem Cell Research (SCSCR) which is located at SSBS.

The stem cell pool in a body resembles a water spring from which numerous stem cells and their cellular derivatives emerge. To set apart resultant cells from their original source, ‘protein-spikes’ appear and disappear on their membranes just like the classic ‘whack-a-mole’ game. The ability to form new spikes and patterns leads to the generation of special cell types, to fill up needs in various tissue destinations.

Given an inexhaustible pool of stem cells, an obvious question arises: can one use these cells in replenishing tissue that is diseased or missing? This grand challenge of understanding the anatomy and dynamics of stem cells began several decades ago. The big task was to identify stem cells among many look-alike cells under the microscope, develop their maintenance protocol and deliver the stem cell cargo at a distant site. Technological developments for the last few decades have been so impressive that now it is routine lab-practice to take a normal cell, convert it back into a stem cell and assign a brand-new role in the body! For example, we can now convert skin into blood, brain, liver and so on – the possibilities are endless. Ever since the successful culture of human embryonic stem cells, the scientific community has worked towards repairing of the damaged tissue or create new organs.

The grand journey of regenerative medicine began in 1962 when John B. Gurdon observed that specialization of egg cells in frogs was reversible. In 1981, embryonic stem cells were identified. This led to the creation of Dolly, the sheep in 1997 and isolation of human embryonic stem cells the following year.

The stem cell research received a major boost in 2006 when Shinya Yamanaka reported conversion of mouse fibroblasts into pluripotent stem cells using a combination of four transcription factors (Myc, Oct3/4, Sox2 and Klf4). These pluripotent cells were named iPS (induced Pluripotent Stem) cells for which in 2012 Dr Yamanaka and Dr John B. Gurdon jointly won a Nobel Prize in Physiology or Medicine.

How do stem cells decide their fate?

It is now recognized that immortality is not a background ‘constant’ but a ‘selectively operational’ phenomenon of stem cells. Just like the army advertises the requirement of new cadets, the stem cell microenvironment ‘broadcasts’ requirement for new stem cells. The ‘microenvironment’ is a systematic network buzzing with intricately woven circuits of stromal and stem cells. The circuits are highly sophisticated to ensure an effective cell-to-cell communication. Just like an engine on a railway track follows a specific route, the secretory molecules march along their specific circuits conveying the message from one cell to another and vice versa.

Depending upon the cellular ‘orders received’, stem cells either generate more stem cells or a blend of ‘stem cells and differentiated cells’ through a process known as ‘stem cell fate decision’. The process is so sophisticated and so finely orchestrated that even a small deviation is sufficient to create havoc, and manifest as a disease.

Thus, the key challenge is to understand how stem cells decide their fate? How do they figure out their future avatar? Despite decades of amazing research, the understanding of stem cell fate determination is far from complete.

It is unclear if the cells differentiate toward a particular fate as a result of intrinsic or extrinsic signals. Some scientists claim that stem cells have ‘deterministic’ elements and that their fate is determined by external factors that activate or repress specific genetic elements and networks.

“The key challenge is to understand how stem cells decide their fate? How do they figure out their future avatar? Despite decades of amazing research, the understanding of stem cell fate determination is far from complete”

The stochastic school of thought however supports the intrinsic route and proposes a differential expression of stem cell specific genes as a function of their evolution from a metastable state to a more stable state.

To understand this complex process better, perhaps an analogy may help. Consider a child as a naïve stem cell, trying to carve out its fate. The deterministic elements are the external factors in the form friends, colleagues, teachers and so on. The stochastic element is genetic elements inherited from parents. Whether a child turns out into a lawyer, sportsman, businessman and so on is determined by a combination of external influences and her/his intrinsic response to the external influence. Likewise, the stem cell fate determination is an outcome of dynamics of, not so well understood, extrinsic and intrinsic factors.

The discovery of stem cells has triggered imagination of stem cell therapy for a long time now. Of many developments in stem cell therapy, bone marrow transplantation has been the most exciting and most successful stem cell therapy. Haematopoietic stem cells are the oldest and the best studied stem cells. It has been more than 60 years, since the first experiments that led to the wide spread application of hematopoietic stem cell transplantation took place. Most early transplantations, especially done in atomic era used marrow as the source of stem cells; however the engrafted marrow cells mounted an immune attack against the host resulting to a condition known as graft versus host disease (GVDH). By 1960s, increasing knowledge of human histocompatibility antigen systems led to renewed attempts in marrow grafting in human patients. Simultaneously, demonstration of HSCs in cord blood suggested the use of this “clinically waste material” for stem cell transplantation. Realization that stem cells can be mobilised into circulation using agents like granulocyte colony stimulating factor (G-CSF), mobilised peripheral blood (MPBL) replaced the invasive bone marrow collection, making the procedure comparatively easier and less painful for both, the clinician and the donor. By 1990s, the number of CD34+ cells in the graft material was found to correlate with success of transplantation. This gave a quantitative parameter to judge the quality of the graft material. The use of CD34+ HSCs from other sources like cord blood occasioned the shift in terminology from bone marrow transplantation (BMT) to hematopoietic stem cell transplantation (HCT).

“Impressive attempts are now being made in programming stem cells towards various cellular phenotypes such as bone, cartilage, heart, nerves etc. Several studies are now underscoring the importance of cell signalling pathways in the use of mesenchymal stem cells in regenerative medicine.”

The bone marrow transplantation can provide a critical life support to the cancer patients e.g., those suffering from leukemia and other haematological and non-hematological disorders. However, given that native cancer stem cells need to be first destroyed through chemotherapy and radiotherapy, the pre-treatment process itself frequently leads to multiple organ failure. This raises an urgent pressing need for ‘a milder precursor process’ for a successful marrow transplant.

Recently researchers at the Stanford University, led by Dr. Judith Shizuru developed a novel pre-treatment process for efficient bone marrow transplantation resulting in significantly lowered side effects. The method has been tested in mice with encouraging outcome. If the method proves safe and effective, it could be used to cure life threatening human diseases in future.  Dr Shizuru’s team decided to specifically label and destroy native stem cells using armour of CD 47 and c-kit antibodies and allowing macrophages to eat them up.  Their goal is to reduce the transplantation rejection levels to zero percent.

So, what is the way forward?

Regenerative medicine is an evolving branch of stem cell therapy. It includes the generation and use of therapeutic stem cells, tissue engineering and production of artificial organs.  Impressive attempts are now being made in programming stem cells towards various cellular phenotypes such as bone, cartilage, heart, nerves etc. Several studies are now underscoring the importance of cell signalling pathways in the use of mesenchymal stem cells in regenerative medicine.  Just a few months ago, Dr Vaijayanti Kale’s team from National Centre for Cell Science (NCCS), Pune  demonstrated that signalling pathways prevailing in the mesenchymal stem cells may affect the outcome of therapy providing a new perspective to the current approaches. Dr Vaijayanti Kale is also the Research Advisor to Symbiosis Centre for Stem Cell Research (SCSCR). Current advances in stem cell research have further identified therapeutic potential of extra-cellular vesicles like micro-vesicles and exosomes that are secreted by the stem cells and this may completely shift the perspective of stem cell therapy, from a cell based therapy to a ‘cell free therapy’ in future.

Stem cell research is making giant leaps that could revolutionise the way we treat diseases.  The possibilities are endless and it is a matter of time when stem cell treatments will get commercialized and implemented for helping patients with a range of human conditions. However, the history of bone marrow transplantation clearly shows that stem cell therapy can become a “standard of care treatment” only if scientifically-correct protocols are developed over-time and are continuously revised by constantly taking feed-back from basic research.