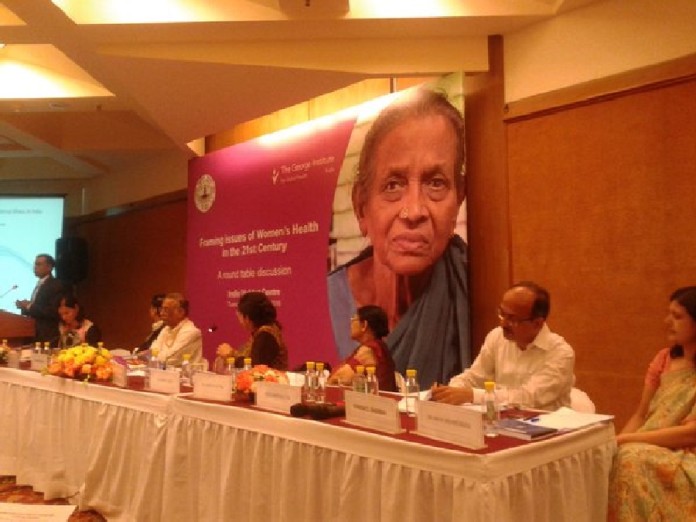 New Delhi: Emerging data in the recent times suggests major discrimination in the area of women’s health. While non-communicable diseases (NCD) like ischemic heart disease (known as heart attack), stroke, chronic respiratory diseases and diabetes take the largest number of lives of women in India, narrative around the health agenda for women remains stuck around issues of sexual and reproductive health.

Therefore, in the backdrop of recently adopted Sustainable Development Goals that have mainstreamed the issue of gender equality and women’s empowerment, the George Institute for Global Health (GIGH) with support from the Indian Council for Medical Research (ICMR) recently initiated a policy discussion on various aspects of women’s health.

The women’s health roundtable organized by GIGH and ICMR on March 15, 2016 was aimed at collecting the views of various stakeholders that can help document gender disparities in awareness, access and quality of care and finding biological, social, cultural and health system related explanations for these disparities.

Dialogue was aimed at specifically identifying the strategies:

Non communicable diseases (NCDs) were responsible for 60% of all deaths amongst women in 2013, up from 38% in 1990. Their contribution is about 40% in the 15-49 year age group, and >75% after the age of 50. Back and neck pain, depressive disorders and respiratory diseases cause major disability amongst women in India.

Lot requires to be done on the policy level, say experts

Experts during their deliberations at the roundtable gave noteworthy suggestions. They broadly agreed that women health issues have not been prioritized in India yet.

“We now know that a number of pregnancy related complications increase the risk of NCDs developing later in life in the affected women and babies born to them, suggesting the need to develop a life course approach to dealing with women’s health issues,” said Dr Shalini Singh, Scientist at the Division of Reproductive Biology and Maternal Health at the ICMR.

Arguing that there was a need to provide stronger evidence to demonstrate the benefits of pursuing such a broader life-course agenda for women’s health, Dr Vivekanand Jha, Executive Director of the GIGH, India said “Governments, intergovernmental agencies and NGOs need to broaden their focus to include health issues related to NCDs. Else, the ongoing health investments will lead to diminishing returns and will not benefit a majority of women.”

Over the last few months, The George Institute for Global Health has been developing a program of research on Women’s Health in different parts of the world – UK, Australia, China and India. This is led by one of the Principal Directors of the Institute, Prof Robyn Norton. As a first step, the Institute was asked by the Oxford Martin School to develop a policy paper on Women’s Health agenda, which was released at the UK Parliament, hosted by Lord Nigel Crisp, chair of the British All-Party Parliamentary Group on Global Health on February 10, 2016.

Ahead of the meeting, Professor Robyn Norton said: “The Sustainable Development Goals include a target to reduce deaths from non-communicable diseases by one-third. We have a small window of opportunity before national strategies are firmed up and if these fail to deliver concrete plans to meet the 2030 target, then we will miss the opportunity to save millions of women dying prematurely.”

The women’s health agenda was first articulated at the Fourth World Conference on Women held in Beijing in 1995. The Beijing Declaration and Platform of Action arising from that meeting discussed a roadmap for gender equality and women’s empowerment with a focus on reproductive and sexual health (SRH) issues, which were the main killers of women then.

Twenty years later, the women’s health landscape has changed dramatically. SRH outcomes have shown noticeable improvements around the world. The Global Burden of Disease (GBD) study has shown that the contribution of communicable, maternal, neonatal and reproductive diseases, to deaths amongst Indian women had declined from 53% of 1990 to less than 30% in 2013.

“Thanks to these efforts,” said Professor Norton, “the women’s health landscape has changed significantly. The global agenda should now address the diseases that are responsible for the greatest burden of ill health, and for all but the poorest countries these are NCDs.”