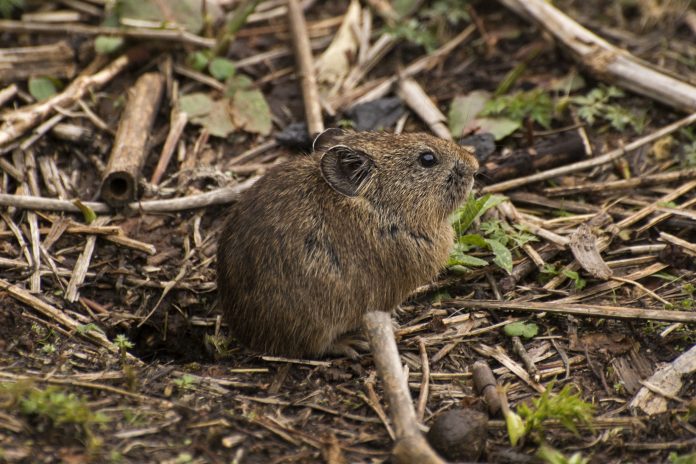 New Delhi: Reported in the journal Molecular Phylogenetics and Evolution, the new pika species, O. sikimaria is an important part of the ecosystem, and sensitive to the impacts of climate change. Nishma Dahal, the first author of the paper and a Sikkim native has been studying pikas since 2010. Little did she know on her first trip to East Sikkim that she was handling a new species of pika.

The research conducted by the National Centre for Biological Sciences (NCBS) with support from the Department of Biotechnology shows that though the species is morphologically similar to the Moupinpika, it is actually very distinct from the former from a genetic and ecological perspective. Link to the accepted manuscript can be found here.

Such discordance between genetics and morphology has never been reported in pikas, although such cases have been reported in many organisms like butterflies, arctic plants and freshwater fishes.

Pikas are cute members of the rabbit family that look like tailless rats, and have been in the news in North America for their sensitivity to increasing temperature, which has caused several populations to go extinct.

Pikas live high up on the mountain or in cold (temperate) places, as they are highly cold adapted. This feature of their biology makes them sensitive to losing their habitat from increasing global temperature. Asia is the hotspot for pika species, and yet our knowledge of Asian pikas is very poor. So poor, that in 2016, new species are being identified in the Sikkim Himalaya!

Most pika species look quite similar to each other. Since they are difficult to identify, Nishma started her work on Pikas by collecting pika pellets to access their DNA and identify species. Pika pellets are tiny but Nishma was successful in amplifying pika DNA from these pellets.

When Nishma compared these DNA sequences to those of other known pika species across the world, she saw that they were quite different. Subsequent fieldwork where animals were captured to sample a small bit of tissue allowed her to collect data that are more extensive and investigate their evolutionary origins and species identity in detail.

However, this was the beginning of her journey. In order to prove this was indeed a new species, she had to compare the Sikkim pika to its close relatives. As luck would have it, they live in China!

It took Nishma and Uma Ramakrishnan two years to build collaborations with researchers from the Chinese Academy of Sciences, Zoological Museum of Moscow and Stanford University to get detailed data on these possible sister species. Apart from the genetic data, they included morphological and ecological data of this species with its sisters. Earlier, this pika was thought to be a subspecies of the Moupinpika. The new NCBS research reveals that while it looks similar to the Moupinpika, it is very different from it genetically.

Thus far, the new species appears limited to Sikkim. The NCBS team searched for Sikkim pika in the other Himalayan regions including Arunachal Pradesh, Central Nepal (Annapurna and Langtang), Ladakh and Spiti without success. Surveys in Bhutan, neighboring regions of eastern Nepal and China are pending and will require international collaborations.

This research is very special to Nishma because she was born and grew up in Sikkim; a small eastern Himalayan state known for its natural beauty and biodiversity. Nishma’s research was possible because of the unique initiative by the Department of Biotechnology to better understand biodiversity in this important location, with strong support from the Sikkim Forest Department.

Nevertheless, all is not well for this cute cold-loving small mammal. “Pikas are among the most fascinating mammalian species. Unlike other mammals inhabiting such harsh environments, pikas do not hibernate. They prepare for winter by collecting and storing hay piles for their winter food. We must investigate their vulnerability to increasing global temperature and to do so we must better understand their ecology and population dynamics. Such information is lacking for Asia pikas,” says Nishma Dahal, who is in the final stages of her PhD research at NCBS on Himalayan Pikas.

“The opportunity to work on Himalayan biodiversity has been amazing, and I have learned how little we know about our own species. Pikas are ecosystem engineers and we must understand more about them so we can effectively protect them in the future,” says Uma Ramakrishnan, whose laboratory at NCBS lead the study.