New Delhi: Science Express Climate Action Special (SECAS II) was flagged off on February 17th from Safdarjung Railway station in Delhi. Three Ministers jointly flagged off the 9th phase of Science Express Climate Action Special (SECAS) from Safderjung Railway Station here today. While Minister of State (Independent Charge) of Environment, Forest and Climate Change, Mr Anil Madhav Dave and Union Minister of Science and Technology, Dr Harsh Vardhan were present at the railway station, Union Railway Minister, Mr Suresh Prabhu, joined the flagging off event through video conferencing. After the flag-off, the SECAS will be open for public viewing at Delhi Cantonment Railway Station on February 18 and February 19. Following the public viewing, the train will embark upon its journey across the country.

The SECAS II will run from February 17 to September 8, 2017, culminating its journey at Gandhinagar.  During its journey, the Science Express will cover over 19, 000 km, and will be exhibited at 68 stations across 20 states of the country. During this seven month journey, SECAS will roll into Tripura for the first time.

Science Express, redesigned as SECAS, intends to contribute towards increasing understanding of the science of climate change, the observed and anticipated impacts, and different possible responses.  It is an innovative mobile science exhibition mounted on a 16 coach AC train, which has been custom-built for Department of Science & Technology (DST) by Indian Railways. This unique mobile exhibition was first launched in October 2007 by DST. Since then it has travelled across India eight times, traveling about 1, 42, 000 km and exhibiting at 455 locations. More than 1.50 crore people visited the exhibition over 1, 602 exhibition days. Science Express has become the largest, the longest running and the most visited mobile science exhibition.  It has six entries in the Limca Book of Records. 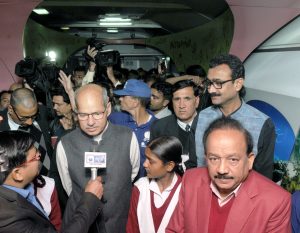 Addressing the gathering, Mr Dave said that in future, the Science Express should reach out to 6.5 lakh villages of the country.  He emphasised that till the train is transformed into a peoples’ movement and a vehicle to motivate people to take individual actions and initiatives to fight climate change, it will not succeed in its endeavours on the ground and will only be reduced to becoming a point of discussions in seminars. “What should each individual do, what should the governments do, what should the society do, everyone’s role has to be determined”, Mr Dave pointed out.  The Minister highlighted that transparency in work and every pie of taxpayer’s money must be utilized in the right measure and past efforts have to be continued to ensure that the money reaches the people.

Minister of Railways, Mr Suresh Prabhakar Prabhu said that Science Express will not just convey the message about climate change, but also generate dialogue and discussion on this burning issue. Science Express will embark on its journey of over 19000 km to cover 68 locations across India till September 8, 2017 and is expected to attract 30 lakh visitors. Climate Action Special will spread awareness on this key issue and augment our efforts to ensure a better future.

Speaking on the occasion, Dr Harsh Vardhan said that four more such trains must be run in the coming years to develop the train into an even bigger movement.   The Minister also said that the importance of Climate Change can be gauged from the fact that it is the only theme that has been chosen for two consecutive years for Science Express. Recalling his visit to San Fransisco to represent India at two meetings on Mission Innovation and Clean Energy Ministerial last year, the Minister said that 21 big nations of the world acknowledged that led by the Prime Minister, Mr Narendra Modi, India has taken unparalleled initiatives in the field of Clean Energy, Mission Innovation, or Climate Change and that India has the ability and the strength to lead the world.  He added that the role of school students is most critical in making the Science Express a peoples’ movement. Recounting the statistics, the Minister said over 1.5 crore visitors and students from 33, 801 schools have visited the Science Express till now.

The exhibition will convey a message about Climate Change and will also be a good opportunity to generate a dialogue and discussion. The state-of-the-art exhibition on board the SECAS aims to create awareness among various sections of society, as to how climate change can be combated through mitigation and adaptation.   Exhibitions in 8 out of the 16 coaches of SECAS have been developed by MoEFCC. Exhibits and activities by DST and DBT have been put up in the remaining 8 coaches.

Some of the broad themes of the coaches include – Underlying reasons for climate change, with a key message that the present change in the climate is due to human activities; impact of climate change and ways to reduce it; adaptation strategies and adaptation measures being taken by India; mitigation and various programmes implemented; international negotiations for climate change and focus on concept of lifestyle choices on what one can do to “Increase the Handprint and decrease your Footprint”.

The exhibition is exclusively devoted to information, case studies and material related to various aspects of climate change, the underlying science, impact, adaptation activities, mitigation solutions and policy approaches in a manner that is easy to understand and interesting, not just for school students, but also for the masses.

The SECAS II is a unique collaborative initiative of Department of Science & Technology (DST), Ministry of Environment, Forest & Climate Change (MoEFCC), Department of Biotechnology (DBT), Ministry of Railways and Vikram A Sarabhai Community Science Centre (VASCSC). MoEFCC has asked Wildlife Institute of India (WII) to extend support in the endeavour.

The previous three phases of Science Express were rolled out as a joint initiative of DST and MoEFCC as ‘Biodiversity Special’ and showcased the myriad biodiversity of India. Thus, it was rational to shift the focus to the theme of climate change, as it will affect the biodiversity of not just India, but the entire globe as well.

Climate Change is an important environmental issue, with many short-term and long-term impacts. From shifting weather patterns that threaten food production, to rising sea levels that increase the risk of catastrophic flooding, the impact of climate change are not just global in scope and unprecedented in scale, but they also severely affect more, the poor and marginalized people. However, there is very little understanding about climate change and its impact.