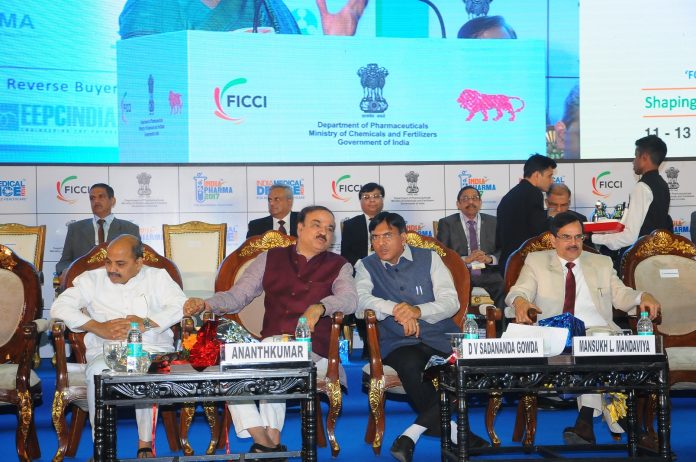 Bengaluru:  The Union Minister for Chemicals and Fertilizers and Parliamentary Affairs, Mr Ananth Kumar inaugurated the second edition of India Pharma & India Medical Device International Conference in Bengaluru on February 11, 2017. The three-day event, with the vision – ‘For Responsible Healthcare’, is being organized by the Department of Pharmaceuticals, Ministry of Chemicals and Fertilizers and Federation of Indian Chambers of Commerce & Industry (FICCI) from February 11-13, 2017.

Addressing the gathering, Mr Kumar called the International Conference as a ‘Pharma and Medical Devices Kumbh’. He called upon all the stakeholders present to make India as the ‘Pharmacy of the World’. The Minister said that the highlights of the 2nd edition of the conference would be the International Drug Regulators Meet and the interface between the regulators and the industry. This interface would help the industry to better understand the International Regulatory framework on one hand and the Regulators to appreciate needs of the industry, on the other. It would help both the stakeholders of pharma sector to fine tune the policies governing the sector, the Minister added.

Talking about the achievements of the Pharma sector, the Minister congratulated the industry for achieving a Compounded Annual Growth Rate (CAGR) of over 15% and expressed confidence that the sector would be worth $55 billion by 2020 from the present $32 billion. The Minister also said that India accounts for around 20% of the World’s generic medicine supply chain, exporting to over 250 countries globally. Indian Pharma Industry provides over 60% of global vaccines, he added.

As per Ananth Kumar, Bengaluru being the hub of Information technology and skilled manpower, would prove to be the ideal location to set up a Pharma and MedTech Zone and hence the Ministry would work with the State Government to establish it soon.

Further, Mr Kumar informed that in this fiscal year, the Indian Pharma sector has received Foreign Direct Investment (FDI) close to $14 billion and has generated employment for over 2.5 million people across India. The Minister also announced from the podium that Bengaluru, being the hub of Information technology and skilled manpower, would prove to be the ideal location to set up a Pharma and Med Tech Zone and hence the Ministry would work with the State Government to establish it soon. This step would give a boost to domestic manufacturing of pharmaceuticals and medical devices in India under the Make in India mission, he added.

Highlighting the long pending issues addressed by the Government to promote Ease of Doing Business in pharma and medical devices sector, Mr Kumar said that correction of the Inverted Duty structure for medical devices, withdrawal of extension duty on imports to promote domestic manufacturing of bulk drugs and bringing about a fair, transparent, predictable and level playing field in the sector etc., has been done by the Government. The Minister further assured the industry that the Government would maintain this stability for the sector in the future as well. Mr Kumar also mentioned about deliberations being made at the highest levels in the Government to make the Department of Pharmaceuticals into an independent Ministry.

Mr Siddaramaiah, Chief Minister, Karnataka said that this is the second time Karnataka is hosting this conference on Medical Device & Pharmaceutical sector, thus giving the State an opportunity to emerge as the desired destination for investments under pharma  & medical devices sector and give a boost to Make in India Mission in this sector. The state pharma industry constitutes 264 manufacturing units that include small-medium, large, public sector and multinational companies. The State stands 5th in Pharmaceuticals exports with 40% of its Pharma produce being exported overseas, he added.

Speaking on the occasion, Minister of State for Chemicals & Fertilizers, Shipping, Road Transport and Highways, Mr Mansukh Lal Mandaviya highlighted that the recent approval of the Pharma and Med Tech zone in Andhra Pradesh has attracted over 30 investment proposals from domestic and international pharma companies which has the potential to reduce the manufacturing cost of drugs and medical devices by around 30% as compared to global prices.

The India Pharma exhibition, being held as part of the event, will cover all the segments of the pharmaceutical industry starting from finished formulations, APIs, bio-pharmaceuticals, fine chemicals & intermediates, natural extracts and excipients. India Medical Device exhibition will showcase med-tech innovations in India across segments from preventive to therapeutic care. Leading Pharmaceutical & Medical Device companies will showcase their expertise and products to Indian and International Healthcare community at the exhibition that will result in creating new business opportunities. Sessions on Biopharmaceuticals will include The New Engine of Growth, Scaling Med-Tech Manufacturing and the Investors Meet, which will be a step forward to the ‘Make in India’mission of the Government of India.

The event will witness over 250 exhibitors from the Pharmaceuticals & Medical Device sector, Buyers from over 24 countries, International Regulators from eight countries (USFDA-USA, PMDA-Japan, MoH-Malaysia etc), over 29 Embassy officials and over 10,000 Business Visitors during the three days of the event. Karnataka will be participating as the Host State of the event while Chhattisgarh will be the Partner State.

Other key dignitaries present on the podium during the inauguration function were Smt. Nirmala Sitharaman, Minister of State (IC) for Commerce & Industry, Mr D V Sadananda Gowda, Minister for Statistics and Programme Implementation, along with Government of Karnataka Ministers, Mr R V Deshpande, Minister of Industries and Dr Sharanapraksh Rudrappa Patil, Minister of Medical Education. The distinguished gathering also included Shri Jai Priye Prakash, Secretary, Department of Pharmaceuticals, Dr Soumya Swaminathan, Director-general of the Indian Council of Medical Research, Mr Henk Bekedam, WHO Representative to India along with other senior officers of the Ministry and doyens of pharma and medical devices industry.