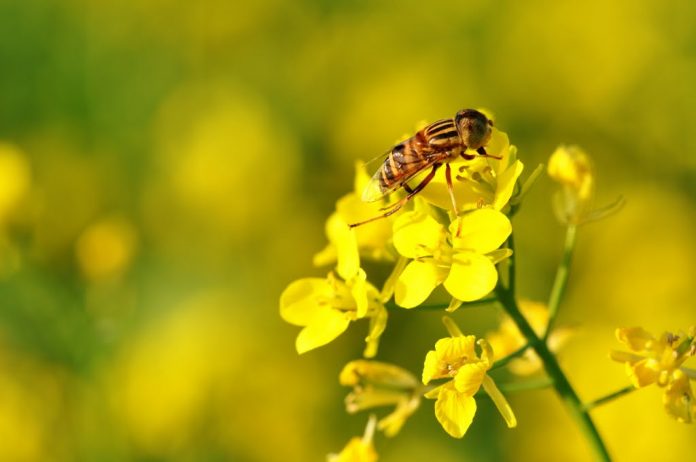 New Delhi: Contrary to what it calls the unsubstantiated evidences, myths and rumors on the ill-effects of barnase-barstar GM mustard technology on honey bees, the South Asia Biotechnology Centre has reconfirmed that the health and foraging ability of honey bee (Apis mellifera L.) populations will not be affected by the pollen of GM mustard. GM mustard is likely to have beneficial effects on honey bees population based on their relatively enhanced foraging behavior resulting in increasing honey production and income of beekeepers in mustard growing areas, mentioned the SABC’s statement to media.

The Assessment of Environment and Food Safety (AFES) report and accompanying empirical data, available for public review at MOEF&CC, have indicated no-ill effects of GM mustard on honey bees and honey production. The AFES and GM mustard studies reassuringly establish that no significant difference was observed for honey bees foraging on the GM and non-GM mustard based on the scientific data generated during nine regulated field trials conducted by Indian Council fro Agricultural Research (ICAR) institutions and SAUs from 2010-11 to 2014-15. “Expression of the introduced proteins, encoded by the barnase and barstar genes, is controlled by a tapetum specific promoter and no expression is detected in the pollen. As a consequence, the exposure of the pollinating insects to these protein is likely to be negligible”, revealed in the AFES report.

Notably, farmers in Australia, Canada and USA have been benefiting from growing GM canola (Canadian mustard) since 1996. The barnase-barstar GM technology has transformed canola production in Canada, Australia and USA and now constitutes a major export farm produce including honey. These countries have approved multiple trait GM canola allowing their farmers to harness the yield potential through hybridization and deploying an efficient weed control system by adopting multiple mode of action weed control systems. More than 90 percent of their farmers grow multiple trait GM canola and reap a bountiful harvest season after season. “No significant adverse effects of GM canola on pollinators, honey bees and honey production have ever been reported by these countries in the last 20 years”, stated Dr CD Mayee, a renowned pathologist and the President of the South Asia Biotechnology Centre.

Dr Vibha Gupta, Principal Scientist of Delhi University South Campus who is directly involved in the GM mustard project informed that “In GM mustard, hybrid DMH-11 is fully fertile with pollen viability similar to the parental line Varuna and has fully developed nectaries. In the BRL-I and BRL-II trials honey bees were observed to visit transgenic lines and hybrid DMH-11 as well as their visit to their non- GM comparators”.

SABC has termed the press conference by the Confederation of Bee Keeping Industry located in the village Hafizpur in Yamuna Nagar district of Haryana to appraise the media of the concerns and objections of the honey industry with regards to GM mustard in the afternoon of 26th Sept, 2016 as politically motivated and a non-scientific reaction to deliberately create fears amongst the general public and misled the beekeepers in particular.

“GM mustard does not contain any insecticide that will kill honeybees visiting its flowers, nor enhances use of sprayable insecticides.  On the contrary, GM mustard with its hybrid vigor will help in increasing more visits of honey bees and consequently of their population. It is this simple logic that we all know and this Confederation needs to learn”, said Dr. Govind Gujar, Ex-Head, Division of Entomology, Indian Agricultural Research Institute (IARI), New Delhi.

None of the GM plants either insect resistant (Bt), herbicide tolerant (HT) and pollination control system (barnase-barstar) currently grown over 179.7 million hectares have had any impact on honey bee health, reported by Dr. Louise Malone in journal Bee World (2004) and subsequently, reconfirmed by Drs. Jian J. Duan et al.  in “A Meta-Analysis of Effects of Bt Crops on Honey Bees (Hymenoptera: Apidae)’ published by PlosOne in 2008.