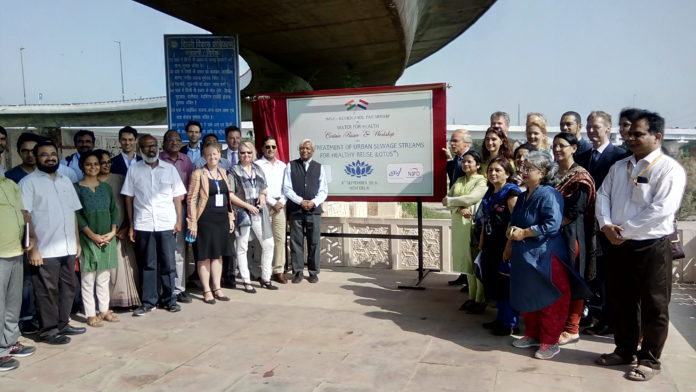 During the two days workshop that follows scientists from India and Netherlands shall finalize the detailed plan of the project and officially start the project.

A Programme of Cooperation (PoC) has been signed on November 9, 2011 between Department of Biotechnology and Directorate-General for Enterprise and Innovation, Ministry of Economic Affairs Agriculture and Innovation, Government of The Netherlands in the areas of Plant sciences and related Biotechnology; Food & Nutrition and Medical Biotechnology. The cooperation also includes public‑private research.

In pursuance of the PoC, Department for Biotechnology, Government of India and Netherlands organisation for scientific research (NOW) and Technology Foundation STW, Government of The Netherlands expressed interest in collaborating in the area of Water for Health. Accordingly, a joint call for proposal was announced in the area. The call supports high quality research and development programmes aiming at ‘new’ wastewater management to ensure good quality fresh water free of risk-causing contaminants and promote productive, safe reuse of water, thereby enhancing human and environmental health conditions.

DBT in consultation with DDA has identified the Barapullah drain, Sarai Kale Khan, in the state of Delhi as a demonstration site for the proposed interdisciplinary technological solutions.

To further facilitate, advance and demonstrate the new wastewater management solutions coming from this research programme, DBT and DDA will provide experimental testing sites along the Barapullah drain where testing labs and the demonstration pilot plant can be established.

Barapullah is a 12.5 km long drain responsible for about 30% of pollution in the Yamuna River, collecting mainly domestic sewage and waste from small industry. This joint initiative and testing site will result in a long-lasting collaboration between Dutch and Indian scientists in the field of water-related research while demonstrating tangible improvement in water quality in the said site.

After a rigorous and robust selection process on both sides, the project “Local Treatment of Urban Sewage Streams for Healthy Reuse (LOTUS)” has been finalized for setting up a demonstration plant for cleaning the Barapullah drain.

During the programme, a demonstration plant will be designed and operated along the Barapullah drain with the support of the Dutch and the Indian consortium. The practical expertise generated through this pilot plant shall focus on finding the cost effective local solutions using local resources and adapt state of art Dutch technology to Indian conditions for the cleaning of the drain. The technologies will be further developed to generate safe water for reuse, as well as nutrients for agriculture use and energy. From the early start of the project, industry and end users (municipality, DJB, NGOs, Shell, Hydrorock, Berson, INNOW, IPstar, Nijhuis) will be engaged in the design at the pilot location as well as in formulation of specific research questions.

Rahul Koul - September 5, 2019
583
Mentioned Dr Alok Roy, Chairman, Medica Group of Hospitals in an exclusive interaction with the BioVoice where he shared his views on the issues surrounding healthcare sector in India.................

Rahul Koul - December 9, 2020
294
In an exclusive interview with BioVoice, Managing Director of J Mitra & Company, Jatin Mahajan shared his views on various aspects related to COVID-19 besides the details of his company’s latest activities, and much more.......................