New Delhi: In a message to children of the nation on the occasion of Children’s Day on November 14 from the ongoing COP 22 in Marrakech, Morocco, Minister of State (Independent Charge) of Environment, Forest and Climate Change, Mr Anil Madhav Dave, strongly urged the children not to waste food. “Take only as much food in the plate, as you can eat. Wasting food is akin to being a ‘Carbon Criminal’, he said. Mr Dave said that the lifestyle with minimum carbon footprint, followed by Gandhiji, Nelson Mandela, Buddha and Mahavira hold the key to fight climate change. 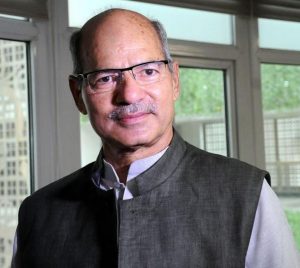 Speaking after releasing the book – ‘Low Carbon Lifestyles – Right Choices for Our Planet’ at COP 22 in Marrakech, Morocco, the Environment Minister said, “Let us make a lifestyle of minimum carbon footprint a movement of the future. We need to cultivate the idea of preserving resources too. Winds of change always start from self and from within”, Mr Dave added.

The Minister informed the gathering that he has initiated some small steps towards this goal in India, but will announce the steps to the world only after it has been implemented for at least two months.

Addressing the gathering, Secretary, Ministry of Environment, Forest and Climate Change, Mr Ajay Narayan Jha, said that the key to the success of Paris Agreement lies in taking Pre-2020 actions.

The book on low carbon lifestyles is a practical guide that shows how simple changes in the lifestyle will help the planet and the pocket. It quantifies emissions reduction that can be achieved by an action as effortless as turning off an unnecessary light and a fan. The book expresses ideas in a format that people can easily understand – the number of additional trees that a specific action is equivalent to and the amount of money saved.

The book is divided into seven sections that cover the gamut of carbon emissions through daily activities. Short success stories from around the world have been showcased to emphasize that change is not only possible, but beneficial too.

The bottom-up approach of the book seeks to address climate challenge by inspiring individuals to start small actions, get satisfaction from knowing how much a simple action has helped and get motivated to do more. Operationalizing the intended role of sustainable lifestyles as enshrined in the Paris Climate Agreement is the need of the hour. This book is a step in that direction.

Prepared by the Ministry of Environment, Forest and Climate Change, the book is an effort by the Government of India to inspire and motivate the common man to take ownership and responsibility in the global response to climate change. This is the first step towards encouraging people to adopt the right path in helping us save our planet.