New Delhi: Cherry Blossom is the flower of any of several trees of genus Prunus, particularly the Japanese cherry, Prunus serrulata, which is popularly known as Sakura in Japan and is part of Japanese life and culture. Japan has been planting the cherry blossom trees in several countries to spread the message of peace and strengthening of bilateral friendship. Given the rapidly growing ties between the ‘Land of Rising Sun’ and India, the India surely had to be on their next list.

Therefore, India became 28th nation and Delhi became the first city in India and 38th city in the world to hold a joint India -Japan Sakura plantation ceremony in February this year. The thought process behind the initiative was of Professor Dinabandhu Sahoo, Director, Institute of Bioresources & Sustainable Development (IBSD) based at Imphal in Arunachal Pradesh.

The ISBD which is a national institute of the Department of Biotechnology, Government of India has launched India’s first ‘Cherry Blossom Festival’ and started planting thousands of Cherry Blossom sapling to spread what it says, the message of peace, tranquillity and friendship, to promote sustainable development in the country. 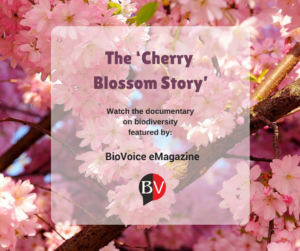 “We have decided not only to use these unique bio-resources to bring peace and happiness but also to promote ecotourism in India especially in the North-Eastern, in a bid to usher socio-economic development of the region,” said Dr Dinabandhu Sahoo who is on deputation from the Department of Botany, University of Delhi adding, “We will continue with our efforts to highlight these unique gifts of nature.”