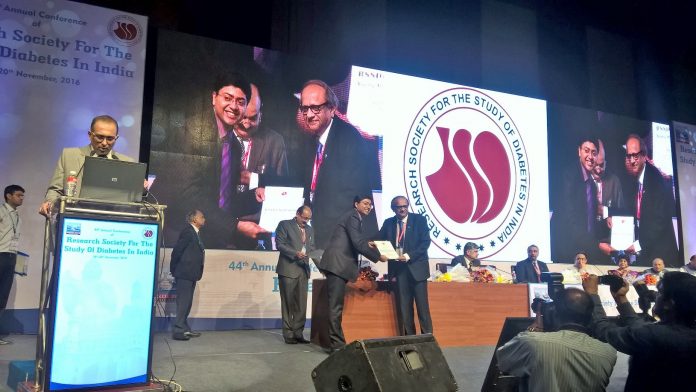 New Delhi: Dr Deep Dutta, specialist consultant at the Department of Endocrinology, Venkateshwar Hospital, Dwarka, New Delhi, was recently adjudged winner of the Novartis Young Investigator Award 2016.  The award was presented to Dr Dutta by the Research Society of the Study of Diabetes in India (RSSDI) at its 44th Annual Scientific Conference held at Hyderabad on 8th December 2016.

This award is the recognition of the best medical-evidence-based research work done on diabetes in India in the year 2016 and also carried a prize of INR 1, 00,000. It has been conferred on the doctor for his pioneering analytical study on diabetes in India.

Expressing his delight on receiving this prestigious award, Dr Dutta said, “I am extremely happy and proud to have received this award validating my contribution and efforts towards the healthcare ecosystem in the country.  I would like to emphasize that the award is not an honor just for me alone, but also for the team I lead at Venkateshwar Hospital. It is indeed a proud moment for our institute, especially the Endocrinology Department, to get recognized among the most professional investigators researching clinical diabetology, epidemiology, and other scientific aspects of diabetes.”

RSSDI, registered in 1972, is the largest organization of diabetes healthcare professionals and researchers in India, and one of the largest global bodies on diabetes with more than 5,500 members and representatives across the country. Every year, RSSDI organizes a national-level conference to provide a knowledge platform for thought leaders in the field of diabetes within the country as well as from abroad. Undoubtedly, the annual conference of RSSDI holds high repute among the medical fraternity and researchers in India.

Earlier this year, entry applications for this award were invited by the RSSDI for researchers in diabetes education who are below 40 years of age. The research publication authored by Dr Dutta was selected for this certification by leading names in the community and has gained high acclaim from endocrinologists across the country. His paper titled ‘Intervening at prediabetes stage is critical to controlling the diabetes epidemic among Asian Indians. Indian J Med Res. 2016 Apr;143(4):401-4.’ focused on highlighting the current burden of diabetes and pre-diabetes in India and the steps needed to be taken to prevent the disease and its risk factors.

“In India, 63 million people suffer from diabetes at present, and the number is likely to go up to 80 million by 2025. A recent study has shown that Delhi alone has more than 30 lakh people suffering from diabetes. Diabetes is rapidly emerging as a major public health concern, and the incidence is increasing beyond urban areas. If we do not take immediate action, the disease may reach epidemic proportions in the near future, posing a major health threat for all age groups, even teenagers and the pediatric population,” says Dr Dutta, while discussing the scope of his study, which won him the award.

“The conventional risk factors of urbanization and sedentary lifestyle are now coupled with unhealthy eating habits and inactivity and genetic attributes, propelling the number of cases of diabetes in India. As we all know, a little self care, monitoring of blood sugar, diet control, and daily exercise and physical activity can go a long way in preventing diabetes to a great extent. But, there’s a lot more we don’t know about. My paper is a sincere attempt to bridge the gap between contemporary knowledge on diabetes and new vistas to be explored on the prevention of the disease and related complications,” adds Dr Dutta.

In a medical career spanning over 16 years, Dr Deep Dutta has published more than 110 authored papers in different international journals and presented his research studies across the globe. He underwent training in advanced molecular methods in diabetes at the Hanover Medical School, Germany. Previously, he has received the Anil Seth Award 2016 for Best Clinical Research in Endocrinology by the Endocrine Society of India.

RSSDI is actively involved in creating diabetes awareness by sensitizing patients, their families and communities at large. The Endocrinology Department at Venkateshwar Hospital is dedicated to delivering world-class diabetes management, along with associated issues such obesity, metabolic syndromes, thyroid and hormonal disorders, and offers the most advanced diabetic care in the national capital. The department has under its wings a specialized diabetes clinic, obesity clinic, pediatric endocrinology clinic, and thyroid clinic.