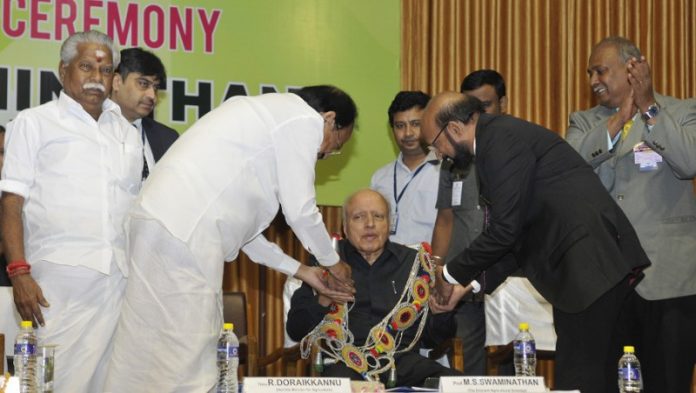 Chennai: While addressing the gathering after conferring ‘Yeraringan’ Award to Prof M.S. Swaminathan in Chennai, the Vice President of India, Mr M. Venkaiah Naidu called him a transformative leader who has inspired many scientists to focus on the problem of Indian agriculture.

The Vice President said that Prof. Swaminathan was a living legend who has done India proud with his extraordinary vision, commitment and pragmatism. He further said that he was truly an iconic figure who has shown to the entire world how research can reach the farms and transform farmers’ lives. He was a man with the deep commitment to our country’s development, he added.

The Vice President said that in 1947, Prof. Swaminathan moved to the Indian Agricultural Research Institute (IARI, Pusa) in New Delhi as a post-graduate student in genetics and plant breeding. He further said that he qualified for the Indian Police Service but chose a different career path. Instead of taking leadership positions in the public safety and security domain, he charted out a new path leading to food security for the country, he added.

The Vice President said that India registered a significant increase in agricultural production in 1960s consequent upon the adoption of the new agricultural strategy and use of high yielding variety seeds and chemical fertilizers. He further said that the programme was a major breakthrough and a turning point in the history of agriculture development in India. Prof. M.S. Swaminathan was at that moment the adviser to the Minister of Agriculture and he had invited Dr Norman Borlaug to India and worked with him in developing high yielding varieties of wheat.

The Vice President said that Prof. Swaminathan’s vision, foresight, intellectual rigour, and the abilities to connect the research findings with farmers’ concerns have earned him numerous awards. He was a Fellow of many of the leading scientific academies of India and the world, including the Royal Society of London and the US National Academy of Sciences, he added.