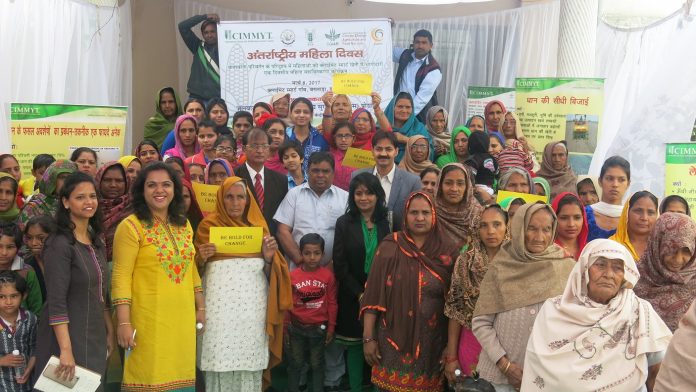 New Delhi: More disparity is being observed in agriculture making rural women have less access than men over resources and hence suffer systematic discrimination. The International Maize and Wheat Improvement Center (CIMMYT)-CCAFS is working on the integration of rural women in decision-making highlights important synergies of productivity and economic empowerment of women for improved livelihood.

On the eve of International Women’s Day on 08th March, an event on promoting adoption of climate smart technologies amongst women was organized at village Bastara, Karnal under the collaboration of CSSRI, ICAR with 70 women participating across 3 villages. The platform provided a ground for progressive women farmers to share their learnings under Climate smart villages (CSVs) with an aim to increase their productivity and profitability.

With residue burning being monitored by government, women need to take lead as agents of awareness across community and with main caretakers of livestock, should have complete control over their rearing, production, distribution and profit.

Dr H S Jat, Senior Scientist, CIMMYT, graced all the participants for attending the event and recommended group formation of 10-15 women to have better access over knowledge and resources.  The integrated social, biophysical and economic approach adopting a portfolio of interventions that cover the full spectrum of farm activities is targeted for raised awareness on CSAPs among rural women for better adoption of seeds, crops, machinery, etc. Capacity building for emancipation of women is vital with the collaborative intervention of stakeholders thereby making women realize their role and potential in society.

Dr Deepa Chandra, Technical Officer, KVK NDRI, Haryana emphasized on self-sustenance with women undertaking training activities organized by their institute for socio-economic upliftment of women. Dr D K Gosain, Program Coordinator, KVK, NDRI, Haryana further established it by stating as an opportunity to forego obstacles hindering their success path. Women have been key contributor in household and work activities but don’t hold a significant role in decision making, which needs to be addressed. With residue burning being monitored by government, women need to take lead as agents of awareness across community and with main caretakers of livestock, should have complete control over their rearing, production, distribution and profit.

Ms Suman, Progressive woman farmer from village Bastara in Karnal stated “Linking with CIMMYT-CCAFS, I learned advanced techniques of farming, which supported better agriculture with increased productivity and profits.” Her association not only benefitted her but also motivated other women to take a step ahead and contribute in scaling of CSAPS across villages.

Similarly, other women who have adopted climate smart technologies also shared their learnings. Women need to be promoted but support from men is desired for overall socio-economic development. Gender equity lies with complementing roles and targeting holistic growth.