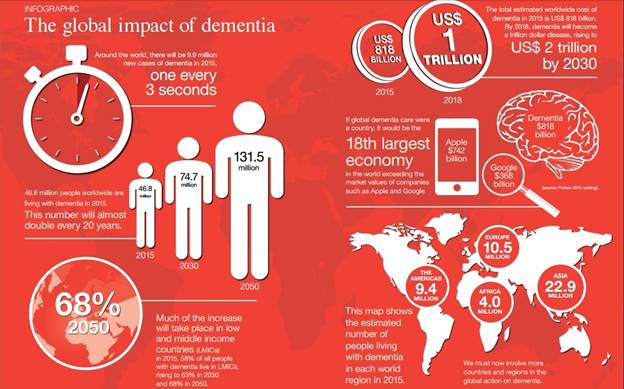 New Delhi: According to Alzheimer ’s disease International, there are an estimated 46 million people worldwide affected with dementia of which an estimated 4 million are said to be in India. Of all the known forms of dementia, Alzheimer’s is the most common type. And yet despite its growing incidence, there is no cure for Alzheimer’s disease and treatment therapies available have little or no effect in stopping or reversing memory loss.

Every 3 seconds, someone in the world develops dementia. By 2018, the global cost of dementia will have increased to $818 billion, making the disease one of the most significant health crises of the 21st century. The number of people living with dementia around the world is expected to almost double every 20 years, reaching 131.5 million people by 2050.

“There are significant social and economic costs associated with Alzheimer’s and with a global ageing population, it is imperative for us to scale-up research to tackle this growing disease burden,” said Suneela Thatte, President of ISCR on September 21, 2016 which is commemorated as World Alzheimer’s Day. “While our understanding of Alzheimer’s has improved over the years with advancements being made in studying the disease, we still have a long way to go before we can offer much promise and hope to patients,” she added.

According to Alzheimer’s Research UK, dementia research is hugely underfunded, especially when compared to other major diseases. They say it receives almost ten times less funding than cancer research, for example.

“One of the biggest challenges with dementia and Alzheimer’s is the social stigma attached to it. People either accept it as a normal part of aging or are reluctant to talk about it,” says Dr Shamsher Dwivedi, Head and Director, Department of Neurology, Fortis Memorial Research Institute, Gurgaon. “We need more people to speak up about dementia as much as we need to build the capacity of the entire ecosystem to handle the growing burden of dementia. Research in this area needs to be accelerated.”

“Aside from obviously increasing the number of clinical trials for Alzheimer’s in India, we also need to make them more accessible to patients,” said Suneela Thatte. “There are several benefits of signing up for trials so we must make research in Alzheimer’s a priority for the millions of patients waiting for better treatment options and possibly even a cure,” she added.