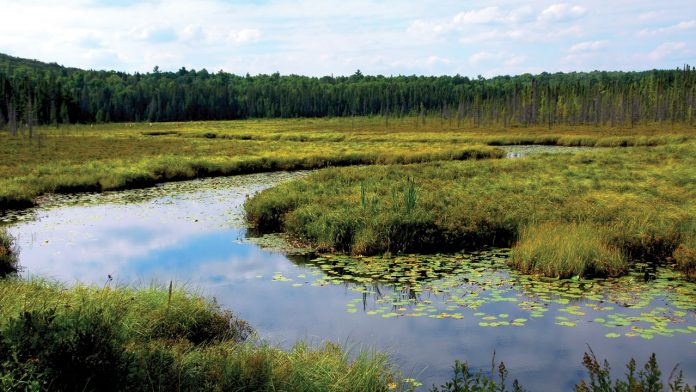 New Delhi: World Wetlands Day is celebrated on 2nd February each year to mark the Day the Convention on Wetlands was adopted in the Iranian City of Ramsar in 1971. India is a party to the Convention since 1982 and committed to the Ramsar approach of wise use of wetlands.

Continued functioning of wetlands has acquired a new meaning in the age of increasing water and food security. Wetlands are the life support for a range of plant and animal life and as wetlands degrade, the existence of these life forms would be under stress. At the same time, it is for the security of human well-being, that wetland conservation acquires prominence.

Wetlands support human well-being in a number of ways. As ‘kidneys of landscape’, wetlands receive flows of water and waste from upstream sources. They help stabilize water supplies, cleanse polluted waters, protect shorelines and recharge groundwater aquifers. The extensive food chain and biological diversity in wetlands make them ‘biological supermarkets’. Wetlands have special attributes as cultural heritage of humanity, and have deep connections with our beliefs and practices. They are an important part of our natural wealth and “liquid assets”. Despite their tremendous value, wetlands are also one of the most rapidly degrading ecosystems.

The theme of World Wetlands Day for 2017 is ‘Wetlands for Disaster Risk Reduction’. This theme has been selected to raise awareness on the vital roles of healthy wetlands in reducing the impacts of extreme events on communities and in helping to build resilience.

This year World Wetland Day is being celebrated in collaboration with the Government of Madhya Pradesh at Bhoj Wetlands, Bhopal, which is one of the 26 Ramsar sites that India has designated under the Ramsar Convention.  All the State Governments have been requested to celebrate the World Wetland Day in their respective States in a befitting manner.

The National Biodiversity Authority (NBA), Chennai, under the Ministry, has planned two events to spread public awareness about conservation of Wetlands. The first is a radio-outreach and awareness generation campaign. In partnership with a prominent radio station with a multi-city presence, NBA will run information snippets on wetlands, their role in disaster management, and ways and means to protect them, over the period of two weeks spread over a month (February 1 – March 2, 2017) in five cities across the country – Chennai, New Delhi, Kolkata, Ahmedabad and Thiruvanathapuram. NBA has also planned a school outreach and awareness raising exercise for February 2, 2017. A large number of schools in Chennai will receive translated copies of the Ramsar handouts for use of students through their school libraries, and school administrators are being requested to organise a small event during the morning assembly to spread the key messages. Municipal Councillors are also being contacted and being requested to take part in the event at their nearest corporation school.

Wetlands are our natural buffers against increasing risk of floods, droughts and tropical cyclones. Wetlands can act as sponges, storing peak rainfall and releasing water gradually during lean season. The floods in Kashmir Valley in September, 2014 and Chennai city in December, 2015 are reminders of the ways wetland destruction can make lives vulnerable.  Evidences from Super Cyclone Kalinga of 1999, Indian Ocean Tsunami of 2004 and Phailin of 2013 underline the role coastal wetlands as estuaries and mangroves can play in buffering communities from impacts of these cyclones and wave surges.

Integration of wetlands within disaster risk reduction planning can be achieved by a series of collaborative actions between wetlands managers and those responsible for implementation disaster risk reduction actions. Assessment of wetland ecosystem health should be made a part of District level disaster planning processes. Wetland management plans should have an in-built component of disaster risk reduction to address the likely impacts of disasters on ecosystem health. Wetlands conservation and restoration should be included within the suite of actions proposed for reducing disaster risk, particularly those related to water, food and climate security. States should constitute Wetland Authorities as nodal agencies for integrated policy, planning and regulation of wetlands. Representation of Disaster Management Authorities should be ensured within the State Wetland Authorities. Mass awareness campaigns should be undertaken to educate stakeholders from all walks of society, particularly local communities on the value of wetland ecosystems.

The Ministry accords high priority to wetlands conservation, and has a dedicated scheme of ‘National Plan for Conservation of Aquatic Ecosystems’ (NPCA) to support State Governments in integrated management of these ecosystems. Till date, over 170 wetlands have been covered under the programme. The Ministry has also introduced Wetlands (Conservation and Management) Rules, 2010 as the regulatory framework for conserving wetlands of the country.

A poster exhibition has been organised at the Ministry to celebrate the occasion. Secretary, Ministry of Environment, Forest and Climate Change, Mr Ajay Narayan Jha inaugurated the exhibition recently. Seventy-five students from Kalindi College and Bharati College of Delhi University visited the exhibition.