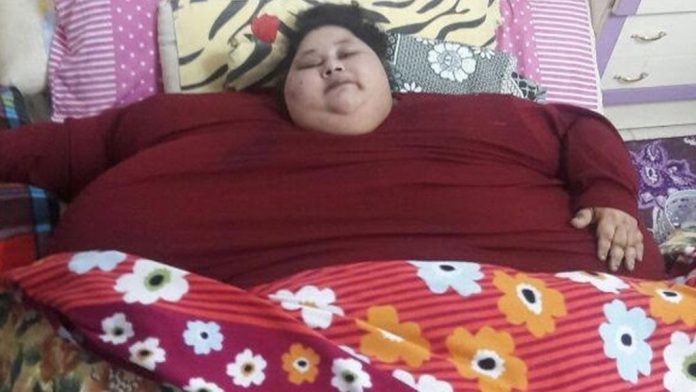 New Delhi: The 36-year-old Eman Ahmed from Egypt, who was recently brought to India for a bariatric surgery, is presently undergoing a series of genetic tests at CORE Diagnostics, one of the country’s leading high-end diagnostics centre in Delhi-NCR. The super-specialty genetic tests will be conducted entirely free of cost over the next few days and will decide the blueprint for Eman’s surgery and future treatment.

Eman is presently considered to be world’s heaviest woman alive, at 500 kg. Owing to her abnormal BMI, she has suffered from various complications since childhood, including type 2 diabetes, hypertension, hypothyroidism, restrictive lung diseases, gout, and several others. The result of the gene study will identify which one out of the 91 different types of genes isolated with obesity-related syndromes are causing the problem for her, say doctors.

“Research shows that genes can control appetite, formation of fat tissue, internal body temperature, and also regulate insulin. In recent times, advancement in molecular genetic testing has ensured that rare genetic variations with a strong link to obesity can be determined easily. These tests enable the physician to customize personalized therapy for obese patients. At CORE, Eman will be going through clinical interpretations for monogenic obesity, as advised by her doctors,” informs Zoya Brar, MD & Founder, CORE Diagnostics.

Genetic changes or variations in several genes contribute to obesity by increasing hunger and food intake. However, in certain rare cases, a specific variant of a single gene leads to inherited obesity in families (monogenic obesity). More often, a complex interplay between multiple genes and the environment may lead to polygenic obesities.

“Genetic screening is gaining prominence in the diagnosis and treatment of obesity. Especially in the case of early onset such as Monogenic Obesity. It helps us as surgeons and clinicians treating morbid obesity decide effectiveness of some of the new drugs in the space or bariatric surgery. We are extremely thankful to CORE Diagnostics for partnering with us in the quest for looking for a cure for Eman’s obesity,” says Dr Muffazal Lakdawala, Chairman – Institute of Minimal Access Surgical Services and Research Centre at Saifee Hospital, Mumbai.

“Identification of a single defective gene and mutation profile is very useful in personalizing therapy and treatment options.  From the medical perspective, it also helps doctors in the prediction of associated risks and in preparing well ahead of conducting a bariatric surgery, such as in Eman’s case. Knowing about which genetic disorders a person is at risk from will allow appropriate lifestyle modifications. Over the long term, genetic test results can be also useful in removing some amount of emotional stress attached to weight control and in relieving stigma,” says Ms Brar.

Eman has been suggested a low-calorie high-protein diet by her doctors as of now. Her genetic test results are expected within the next four weeks, which will conclude her future course of treatment mechanism. Eman’s lipid profiles are indicative of a positive chance of losing at least 80 kg in the next one month, and more than 150 kg, within a year, given the fact that many new drugs are available today to treat monogenic disorders.

Inspired by innovation and driven towards excellence and precision, CORE Diagnostics has, since its inception in 2013, been offering a rich menu of the most advanced diagnostic tests in India.