Home Biotech Achira Labs gets ‘National Award’ for indigenous product commercialization
Share on Facebook
Tweet on Twitter
New Delhi: The President of India, Mr Pranab Mukherjee awarded the Bangalore based startup, Achira Labs, a pioneer in developing advanced microfluidics-based solutions for applications in diagnostics, with the National Award for Indigenous Product Commercialization on the occasion of Technology Day event on May 11th at New Delhi. The event, held at Vigyan Bhavan convention centre was attended by Dr Harsh Vardhan, Union Minister for Science and Technology and Mr Y S Choudhry, Minister of State for Science and Technology.

Achira Labs was nominated by the Biotechnology Industry Research Assistance Council (BIRAC) to receive the award for developing indigenous technology in the field of point of care medical diagnostics and its commercialization.

The award instituted by the BIRAC carries a citation, trophy and a cash prize of Rs 1 lakh. It was given to Achira Labs this year for developing advanced technology in the field of point of care medical diagnostics. The concept involves the discipline of microfluidics and optics to analyze chemical constituents in blood samples, providing for accurate and immediate analysis. The technology was incorporated into the ACIX-100, a portable device developed by Achira Labs for commercial application. 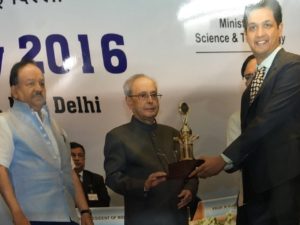 The commercial application of the brand-new technology allows testing of blood samples at the doctor’s clinic or a small lab at about half the cost and a fraction of the time taken by large and expensive lab equipment. It is also expected to support the future development of low-cost technologies towards personalized health care solutions and management. Soon, the point of care solution, which miniaturises the functions of a diagnostic lab on a small chip, will empower doctors to undertake informed decisions almost immediately by having access to quantitative and confirmatory results.
Outstanding contributions to the field of Science and Technology by Indian companies were recognized by various government agencies and nominated to be awarded on the occasion. 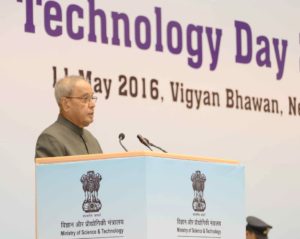 Speaking on the occasion, the President, Mr Pranab Mukherjee said a bright scenario is emerging for the Indian start-up eco-system with the presence of favourable factors like availability of funding, platform for consolidation, suitable technology and a burgeoning domestic market.

“The possibility of 11,000 start-ups by 2020 is real. Start-Up India and Stand-Up India schemes have the potential to trigger another round of socio-economic transformation similar to the initiatives of last decade when rights to job, education and food were provided, backed by legal guarantees. However for such an eco-system to thrive, government efforts are not enough. It requires the contribution and eager participation of stakeholders at various levels,” Mr Mukherjee said. He urged all present to take a pledge to make sustained efforts in this direction on National Technology Day.

Rahul Koul - June 21, 2021
428
This edition of Chat with BioVoice features Suneela Thatte, Vice President & Head, R & D Solutions, IQVIA India who believes that the demand for faster and better drug development brought on by the pandemic is only going to accelerate the adoption of digital technologies........................